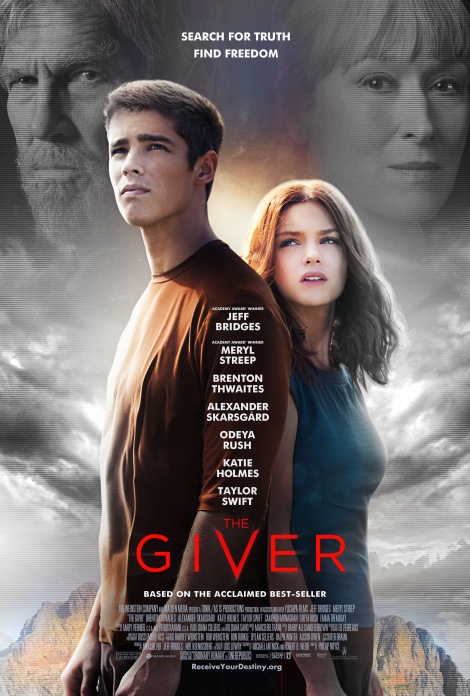 FRIDAY NIGHT MOVIE REVIEW: Last night I saw “The Giver” which stars Jeff Bridges (Iron Man, Tron: Legacy), Brenton Thwaites (The Signal, Maleficent), Meryl Streep (The Devil Wears Prada, The Fantastic Mr. Fox), Odeya Rush (The Odd Life of Timothy Green, We Are What We Are), Katie Holmes (Dawson’s Creek, Batman Begins), Cameron Monaghan (Click, Shameless), Alexander Skarsgard (True Blood, Battleship), Emma Tremblay (The Judge, Elysium), and Taylor Swift (The Hunger Games, Valentine’s Day). This movie is about a utopian community where there is no poor, no rich, no winners, and no losers. Everyone is the tell the truth and get vaccinated once a day. Even though everyone is normal and sees black-and-white, there is an eighteen-year-old named Jonas (Thwaites) who sees some color and often thinks of possibilities outside of normalcy. Whenever it is time for the Chief Elder (Streep) of the community  to decide where the newly graduated kids are to work for the rest of their life, Jonas gets left alone on stage not having been chosen what his job is. It is not a mistake though, for he gets one of the most profound jobs of the whole community: the Receiver of Memories. It is a difficult task to take on and with the help of his teacher, The Giver (Bridges), he will start to realize that there is more to life than what is being put out by the community.

The story to this movie is very interesting. I have never read the book, but I know what it is and the basic gist of it. It gives a sense of how life is special. By Jonas learning of what life used to be like, I began to appreciate what life really is and that is basically the overall message of this story. The acting was fantastic, with Jeff Bridges playing a great role and even Brenton Thwaites was good after seeing him in “The Signal” a couple of months ago. The special effects were also great and the way the colors were portrayed in this film really made it shine and brought the story out even more. It reminds me of the movie “Pleasantville” where everything is black-and-white and whenever they begin to take risks and explore past the boundaries of what is meant to be, they turn to color. There was only one con that I found in this film. That con is that things in this movie seem unlikely to happen. For example, when Jonas goes trekking off outside of the community with Gabriel, it starts to get snowy and they automatically have coats on even though they didn’t really bring anything. Others would include characters and how some that weren’t even affected by emotions still got them. It left some holes in this movie’s plot. It seems that people may have gotten upset with this adaption because it didn’t pertain to some things in the book, but I can’t judge since I have never read it. Overall this movie did a great job and I recommend anyone to see it! FINAL SCORE: 87%= Juicy Popcorn