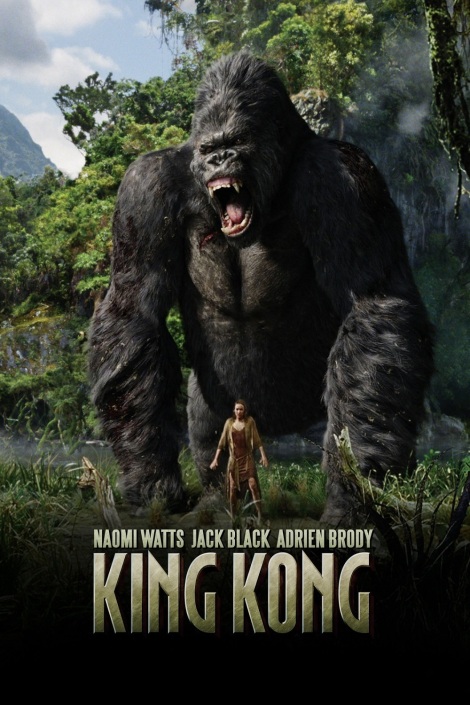 FRIDAY NIGHT MOVIE REVIEW: Sorry about not posting this sooner, but the Movie of the Year award day is busy. Anyway, the movie I saw Friday night is “King Kong” (2005) which stars Naomi Watts (The Ring, The Impossible), Jack Black (Nacho Libre, The Cable Guy), Adrien Brody (The Pianist, The Grand Budapest Hotel), Thomas Kretschmann (Wanted, Resident Evil: Apocalypse), Collin Hanks (Orange County, The House Bunny), Andy Serkis (The Lord of the Rings: The Two Towers, Dawn of the Planet of the Apes), Evan Parke (Django Unchained, All My Children), Jamie Bell (The Adventures of Tintin [movie], Jumper), Kyle Chandler (Super 8, Zero Dark Thirty), and John Sumner (District 9, Whale Rider). It’s 1933 and New York City is booming. Above everything that goes on, the more primary source of enjoyment is entertainment. A filmmaker named Carl Denham (Black) is trying to make something that will change the world in terms of movies because a movie is a work of art. He wants to film on location instead of a back lot and he finds a map that leads to a mysterious place known as Skull Island. To get there he needs money and when he finds out that his bosses are going to fire him for the bad progress he is making with the film, he packs up with his crew to leave that same night to go to Skull Island and shoot the film without his bosses consent and without anyone knowing. To do the film though, he needs a lead actress since his previous one dropped out of the film. So he takes a starving stage performer named Ann Darrow (Watts) and tricks the famous writer of the movie script named Jack Driscoll (Brody) into staying on the boat with them on the trip to Skull Island. Nothing goes well for them however, because when they get to Skull Island they find that it is one of the most dangerous places on Earth with savage tribal people, dinosaurs, and the ruler of the island known as King Kong. 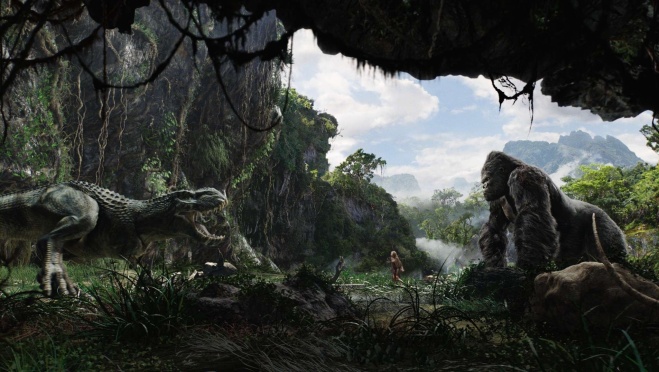 I have seen this movie before, but it was long ago when it first came out. I couldn’t remember specific parts of the film except the ending, so when I got this for Christmas I really wanted to see it again. Knowing Peter Jackson (The Lord of the Rings and Hobbit trilogies) and his films, this would be a long watch, and it was, having me watch this movie for over three hours. But, it was a great movie. The story was very well-made with a great setting, great costumes, and great lifestyle of the 1930’s New York. The tones and textures of this film were magnificent going from a dark, bustling New York to a luscious, creepy Skull Island. The special effects were fantastic in this movie as well as the action scenes, which were plentiful in the movie. Acting was also done awesomely, having seen some work of almost every actor. One thing that Peter Jackson does so well with his movies and that I look up to is his character development. In his movies, he gives characters depth and he brings the viewer on a long journey with them so they can connect with the character and their predicament. He makes you feel for these characters and by the end it gets you emotional because of the long journey they had. Of course the price to pay for this is a long movie, but in most ways it is worth it in “King Kong.” There are two cons that I found with this movie. The first would be that it does drag in some spots. When you have a movie this long, it is a difficult task to keep it fresh and rolling all the time. The last would be some decisions regarding the style of filming. I’m not a big fan of the shots where the camera is going in some creepy slow motion and shaking like when they first got attacked by the tribe on the island. Other than those, this film is a true spectacle and I recommend anyone who hasn’t seen it to watch it! FINAL SCORE: 90%= Juicy Popcorn