MOVIE THEATER REVIEW: Pixar’s “Inside Out” is voiced by Amy Poehler (Parks and Recreation [TV series], Mean Girls), Phyllis Smith (The Office [TV series], Bad Teacher), Bill Hader (Cloudy with a Chance of Meatballs, Superbad), Lewis Black (The Aristocrats, Root of All Evil [TV series]), Mindy Kaling (The Mindy Project [TV series], Wreck-It Ralph), Richard Kind (Spin City [TV series], Argo), Kaitlyn Dias (The Shifting), Diane Lane (Man of Steel, Unfaithful), Kyle MacLachlan (Twin Peaks [TV series], Blue Velvet), and John Ratzenberger (Toy Story, Monsters Inc.). It is directed by Peter Docter (Up, Monsters Inc.). This movie details what goes on inside the head of an eleven-year-old named Riley (Dias). In her head she has five emotions running things: Sadness (Smith), Fear (Hader), Anger (Black), and Disgust (Kaling), all lead by Joy (Poehler). They’ve been operating in Riley since she was born and have been able to tackle any situation. But when Riley’s parents decide to move to San Francisco, everything changes. Riley begins experiencing different feelings of the move because of how hard it is to adjust and her emotions are going through the same turmoil. It all goes downhill however when Sadness accidentally drops all of Riley’s core memories that make her happy, and when Joy tries to fix it, her and Sadness get sucked up out of Riley’s control room and into the other parts of her head where the memories are stored. With Joy gone, things go crazy because Riley has no way to be happy so Joy and Sadness have to try to find a way back to the control room so they can fix things. 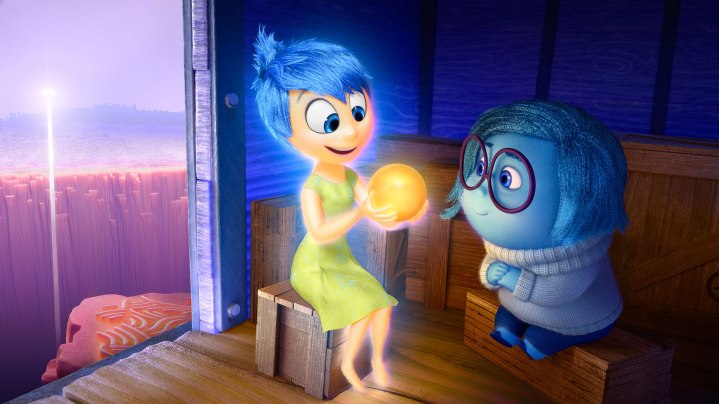 All of the cards are on the table. It’s either go big, or go home. After hitting a rough patch in their dynasty (“Cars 2”, “Brave”), Pixar was on the verge of becoming known as a once fantastic producer turned mediocre. In my opinion, I thought “Cars 2” wasn’t as bad as people said. “Brave” was okay as well. “Monsters University” was a good step up, and my review justified it well. But it was a prequel, and having met all the characters and knowing the situation, it didn’t give off anything original. And then “Inside Out” comes along. The newest in Pixar’s ever-growing franchise. When I saw a trailer for this, I thought it may be good, but nothing great. Once the critics saw the movie, it got a lot of great ratings, being highly praised by almost all. That really brought up my expectations, making them very high. And although a good bit of my expectations were met, not all of them were. The plot was very original, with many clever ideas involved in the making of it. I really enjoyed seeing how their interpretation of the mind worked and how it effected its host. One thing that I really loved about it is how it can connect with any audience. No matter how old I get, this film will never get old, with certain references to offer to people of different ages. When I get older, I am sure that I will get different experiences out of this movie. The voice acting was spectacular. Everyone brought a true essence to their character and you can really connect to them. I think the biggest pro this movie could possibly receive is the animation. Goodness, from the beginning to the end, this movie was pure eye candy. The fine detail on all the characters and surroundings were outstanding. In this movie, you also get two types of animation. You get the real world animation, the one where Riley lives in, and you get Riley’s mind animation, which looks more cartoony. Each one offers a lot to the table and it is hard to decide which one I prefer most. One of my favorite scenes is one where Joy and Sadness become abstract, changing their shapes. It was amazing in terms of animation. Something that I was awaiting in this movie was how “emotional” it can get. Most of the critics I read said you will cry in this film. Although I didn’t cry, I came close three times (I will admit it). It’s not an extremely touching film, but it will pull at the heart-strings sometimes. When it comes to cons, I can only think of two. The first would be how the beginning takes a little while to jumpstart. There was good comedy in it and it had some good scenes, but you don’t really get to the meat of the story until the fifteen minute point (around the time Joy and Sadness start their adventure). The last con is more of a minor one: some things can be silly. It’s what I would expect in these types of movies, mainly because it has to appeal to the kids in some ways. Overall, I thought that this movie was fantastic. It wasn’t perfect like the critics may have said, but it is a great comeback for Pixar and I can’t wait for more movies to come. So check it out, while it’s still in theaters! FINAL SCORE: 93%= Juicy Popcorn

The score of this film has been changed. It does not affect the outcome of the Movie of the Year for 2015.

Now as you see above, this review is a double review. The reason why it is like that is because I am also reviewing the Pixar short that came before the movie. Every Pixar movie has some sort of short before it so I feel that they are in a way part of the movie experience. Although I am reviewing it, it will not be in the running for any movie awards since it isn’t a movie, unless I decide to make a new award based around movie shorts. So here is the review for Pixar’s new short, “Lava”: 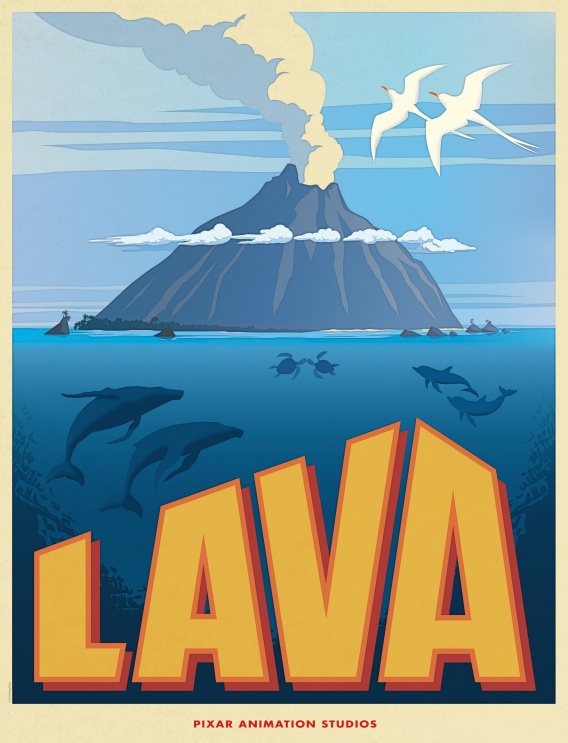 MOVIE SHORT REVIEW: “Lava” is a Pixar short which is voiced by Kuana Torres Kahele and Napua Greig. It is directed and written by James Ford Murphy. It tells the story of a volcano named Uku (Kahele) who sings a ballad of how he waits for someone to love to surface, being another volcano.

Sorry for the short piece of plot above, but anymore I give out will spoil everything. Pixar’s shorts are kind of a tradition to their viewers. They started their business making shorts before they made “Toy Story”, which basically got them to where they are today. I’ve seen almost all of their shorts and there are a lot that are worth mentioning. What I expect from their shorts after seeing ones before is something of a short masterpiece. Every Pixar short offers a different type of animation and a really good story that is short, but meaningful. I can’t remember what the last three shorts were, but I’m sure they were average to good. “Lava” is something different. The whole thing is a song, which can be offsetting for someone like me because musical-type movies nowadays are not the best. Before I really discuss how the plot is (because it is the most controversial), I’ll state the main pros to this short. The first is the animation, obviously. It is set in the tropics and it is beautiful. Everything from dolphins jumping out of the water to the lava spewing out of the volcano looks truly amazing. It is something I can watch for an eternity with the sound off. The next and last pro would be the singing. I will say that the singers of this are good at what they do. I’ve seen plenty of bad singing and thankfully Pixar found good people. Now onto the plot. I will say that half of this short felt silly and not in the good way. With what the lyrics depicted, it felt cheesy and weird for Pixar to do. It was entertaining, but it felt more like a prepping for the movie where you can tune out rather than something you can watch on its own. But once it got to the final act, it got better and it put a smile on my face. The execution of the ending was well-thought-out. It wasn’t a spectacular ending, but it saved this short from being burnt and that’s good enough for me. I will say that this short isn’t the best Pixar has done and may not even be in the top ten, but it is enjoyable and charming to watch overall. FINAL SCORE: 79%= Juicy Popcorn

Here is a little forty second clip in case you are interested: