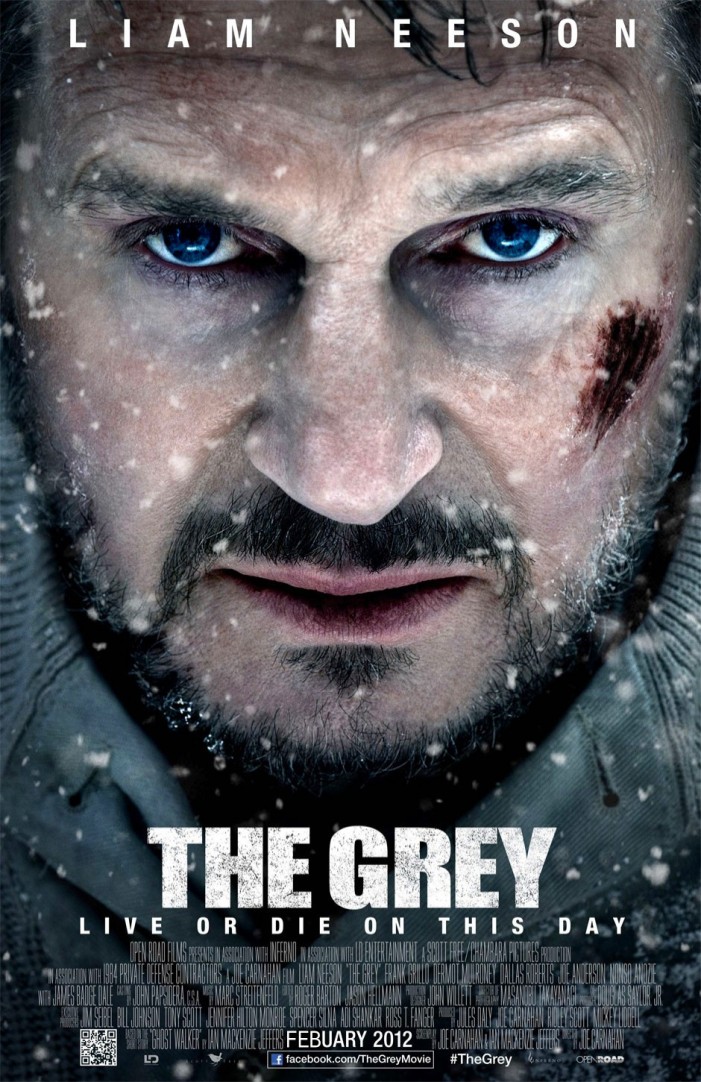 GREEN JEANS MOVIE REVIEW: Last night I saw “The Grey” with Captain Critic, which stars Liam Neeson (Taken, Non-Stop), Frank Grillo (Captain America: The Winter Soldier, Minority Report [2005]), Dermot Mulroney (My Best Friend’s Wedding, About Schmidt), Dallas Roberts (3:10 to Yuma, Dallas Buyers Club), Joe Anderson (Across the Universe, The Crazies), Nonso Anozie (Ender’s Game, Cinderella [2015]), James Badge Dale (Iron Man 3, World War Z), Ben Bray (No Country for Old Men, Iron Man), and Anne Openshaw (Narc, American Mary). It is directed and co-written by Joe Carnahan (The A-Team [2010], Narc). When oil workers in Alaska board a plane towards home, it suddenly crashes. Along with the workers is John Ottway (Neeson), who kills wolves for a living and his help is needed more than ever when a pack of wolves are constantly coming up on the survivors because they are close to the wolves’ den. Ottway must find a way out of their predicament and save the others survivors before they die to the cold, or worse….the wolves. 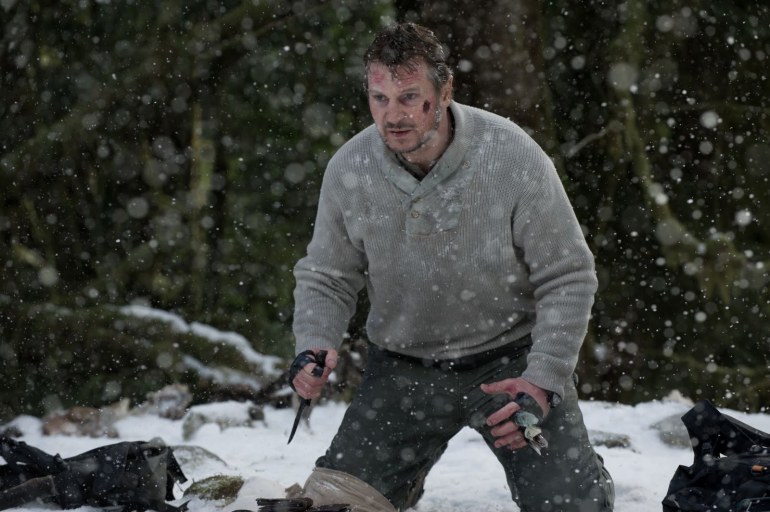 Liam Neeson is a guy you don’t want to cross paths with. Quite a bit of films that he is in involve everyone around him in peril and usually dead before the credits roll. “The Grey” is no exception. I’m going to start my review by writing that the plot to this film is fresh, but simplistic. I haven’t seen a survivalist in a snowstorm movie in a long time so this was something interesting to encounter. The problem with this film is, that is just it. People crash in the middle of the stormy Alaska and have to avoid wolves. It relies on the thrill, and when I say problem that isn’t a bad thing. What I mean is that to really hook an audience, you have to provide reason and thrills constantly with this film, so it is a daunting task to accomplish. Did they pull it off? Not entirely, but they did a good job for what it’s worth. The plot is different, but simplistic with a good portion of it being predictable. I had technical difficulties watching this movie with Captain Critic, with the video buffering constantly, but yet I could still get a grasp on what is going on, which can be an issue. Sure, it’s great that I don’t miss much in mind when I have to wait for it to load time after time, but that’s the big problem. Nothing really surprises you in this movie and many things feel the same. They are haunted by wolves, wolves show up, someone dies, keep moving forward. It happens so much that it not only hurts the story, but the characters as well, which brings me to the next aspect of this film. The acting is this movie is pretty good, with Liam Neeson being awesome. He is a cool guy who can act fantastically in any serious role. He adds a lot of depth to his character and you can feel for him. All the time spent around him, however, steals the spotlight from those around him, making them all expendable and predictable of their outcome. Yeah, I feel sorry for them, but that’s all I feel. I don’t connect to any of them or their past like Liam making it not the most unfortunate to see one of them go. With these characters come their reasoning, which can be unrealistic at times. There was a scene where the group encountered more wolves, but were able to build a fire in time to keep them away. The people would’ve been convincing if they were crap-my-pants scared, but they were having a good ‘ol time, cracking up jokes. “This is why I’m more of a cat person.” Yes, someone said that. Some of their decisions were kind of stupid, but it is what you do to progress the story to the writers’ climax so you have to roll with it. To be honest, after all this hate I projected towards this film, I don’t dislike it as much as you think. The cinematography of this movie was great, especially some of the themes of the characters’ shortly written pasts. The way it is crafted and designed is intriguing. The cold landscape is also beneficial. They did a great job with the setting and although it was terrifying to imagine being there at first with the snowstorms, when they arrived at a stream to look at the mountains it was beautiful. Special effects were definitely well-made, the wolves being animated greatly. It is an enjoyable experience that is new to watch and although I had a gut feeling as to how it would end, I wanted to see it filled out. One con I didn’t mention is the ending. There is a great ongoing theme of a poem with Liam Neeson which I enjoyed and they put it in one last time at the ending and, although it was cool, the movie cuts short of letting you know what happens. They send you to a big climax which they want you to figure out the outcome yourself. This made me frustrated. So I waited to see if there was an end-credits scene and sure enough there was. Still it offered nothing to me. It mimicked a scene in the beginning which was cool, but it gave me no clue as to what the outcome came to be. I think it is a lazy excuse. I don’t care how Hollywoodish or gory or sad it may end up being, I just want to see a conclusion. I didn’t get one, so that brought down the score that I originally had in mind. So, overall, this film is fun and fresh. It may be predictable and have other kinks, but it filled out a well-crafted, overlaying theme that I am sure many will enjoy. FINAL SCORE: 75%= Juicy Popcorn

One response to ““The Grey””