FRIDAY NIGHT MOVIE REVIEW: Tonight I got the chance to see “Pixels,” which stars Adam Sandler (Big Daddy, Happy Gilmore), Kevin James (The King of Queens [TV series], Zookeeper), Michelle Monaghan (Source Code, Eagle Eye), Josh Gad (Frozen, Jobs), Peter Dinklage (Game of Thrones [TV series], Elf), Matt Lintz (Kill the Messenger, The Crazies), Brian Cox (The Bourne Identity, Troy), and Sean Bean (Legends [TV series], The Lord of the Rings: The Fellowship of the Ring). It is directed by Chris Columbus (Home Alone, Mrs. Doubtfire) and is written by Tim Herlihy (Billy Madison, Happy Gilmore) and Timothy Dowling (Just Go with It, This Means War). When an invasion of aliens come to earth in the form of arcade video game characters, it is up to a gaming pro named Brenner (Sandler) and his small team of gamers to stop them before they take earth as their own. 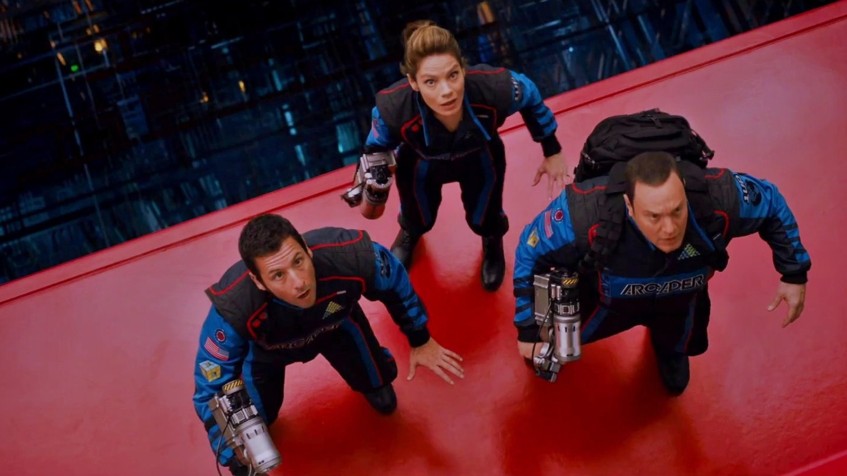 In starting this review, I want to first say that if you ever want to watch this film, regardless of my opinion, don’t watch it expecting a classic or something even remotely good. I guarantee that if you walk in with low expectations or at least none at all, you may end up liking this movie or thinking it deserves more credit. With that aside, I will say that I had low expectations of this flick. The reviews stunk, I believe it didn’t do well at the box office, and it was just an all around flop. For some reason Adam Sandler has been on a slope lately. The quality of his films are starting to diminish. “Blended” was average and I think I gave it Juicy Popcorn, but then we got “The Cobbler” which was a mess, giving it a Burnt Popcorn. I didn’t expect anything to be good in this film and I’m glad I did because it softened the blow. This wasn’t an awful movie, it was just a disappointment. With such a promising synopsis, one would think that the writers would have the right mind to come up with a fun-loving, all-out blast of a film, but not in this case. Sure, it feels like there was some care put into this (very little) and it felt like there could’ve been something more. But oh man, what they gave us! There are a lot of things wrong with this movie and I’ll start with the story. Although alien invaders in the form of old arcade video games sounds cool, it’s really an excuse to stock up on a CGI fest of flashing lights and pixels flying everywhere. We find Adam Sandler and his crew fighting these villains by just shooting them at random places. Some of the structure can be interesting, like the Pac-Man scene, but after a while it gets old, especially with the conglomerate of a mess at the end besides Donkey Kong. Characters are hollow in this movie with only a few offering something to the table. I felt a lot of the jokes that were said were stale and held nothing funny to them. Josh Gad and Peter Dinklage’s characters were the only ones that made me laugh genuinely. And that was good, I’m actually giving some points for them because I thought that they had some good lines. No character was really developed in this movie to the point where I would actually care though. Adam Sandler’s character holds some value, and so does Michelle Monaghan’s, but usually whatever internal conflict there is gets set aside for another CGI battle. One character that I couldn’t stand was Kevin James’s. Don’t get me wrong, Kevin James is awesome, but he was the president in this. The president of the United States! I couldn’t take the guy seriously because all I saw was Kevin James in a suit. And plus, he really didn’t matter to the story anyway besides providing Adam Sandler with intel on the invasion (notice how I’m not saying any of their characters names, but rather the actors). Besides the characters, the special effects were good. They were detailed and a lot of work was put into them, especially certain game characters. And the acting was okay for what it was. I only saw the actors and not their roles, except for maybe Peter Dinklage’s, so there wasn’t much to it. Other cons that I haven’t mentioned in this review include plot holes and other nonsense that went throughout this film. I think I could provide a tree with twenty years worth of carbon dioxide with the amount of times I heavily exhaled throughout this movie. One stupid scene would be the end result of Josh Gad’s character (which I won’t spoil). Overall, this is a weak release that has some funny and enjoyable moments, but falls flat all the other times. FINAL SCORE: 64%= Burnt Popcorn