MOVIE REVIEW: “Moneyball” stars Brad Pitt (The Curious Case of Benjamin Button, Mr. and Mrs. Smith), Jonah Hill (Superbad, True Story), Phillip Seymour Hoffman (Mission: Impossible III, Capote), Robin Wright (Forrest Gump, The Princess Bride), Chris Pratt (Parks and Recreation [TV series], Jurassic World), and Stephen Bishop (Battleship, Safe House). It is directed by Bennett Miller (Foxcatcher, Capote), the screenplay being written by Steven Zaillan (Schindler’s List, Mission: Impossible) and Aaron Sorkin (The Social Network, A Few Good Men), the story written by Stan Chervin (Space Warriors), and it is based on a book of the same name by Michael Lewis (The Blind Side, The Big Short). When Oakland A’s general manager Billy Beane (Pitt) realizes his boss’s won’t give him sufficient money to build a good team, he finds a young man named Peter Brand (Hill) who gives him a new system of winning games. This system requires players who aren’t highly respected, so everyone will be against Billy and Peter in their journey of making history. 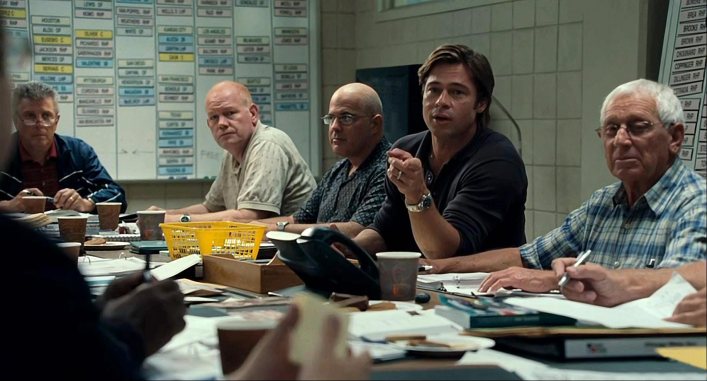 Phenomenal. Truly phenomenal. That is how I would describe this film. It’s not about the game, not about the big-name actors, not about the end result. It’s about the journey, the struggle, and how one man stuck with his gut throughout it all. This movie offers a lot to its viewer. So many inner-workings flow through its story, giving several lessons to partake upon, both personally and from a business standpoint. Throughout its over two hour runtime, this picture went hard, throwing engaging dialogue and relatable characters left and right. It breathes reality, and not one moment in this film did it feel fake. Everyone was against Billy Beane and what he was trying to accomplish. Well, except Peter that is. They went against the system, sought to adapt in hopes of making a name for their team. No one knew what would happen in result. They took a leap of faith, and stuck with it even when the odds were against them. What makes this movie so grand is the fact of how inspirational it is even though it never gives that ooey gooey vibe. I felt for these characters, even though Billy Beane was the main focus. The script was so well-crafted that I never felt fully supportive of Billy. I could tell that if I was working with a guy like him during that time, I would’ve thought he was crazy and went against him the whole way. That’s how fantastic this is. Plus, the dialogue is great. There was never a time where I questioned what real person would talk that way or why do all characters’ dialogue sound like they come from the same person. This builds personality, and this story has a lot of it. The acting in this was spectacular. Everyone played their part well and I enjoyed watching every one of them. Brad Pitt was exceptional as well as Jonah Hill. It was cool seeing Chris Pratt in this since he is becoming a superstar nowadays. The directing was also fantastic. That and the way it was edited gave the plot a gloomy look, and it fits the tone because the setting of this is in a slope of a team’s career. If you like movies with strong characters, this is a choice I would recommend. Although only one character gets focused on, it is done masterfully, with flashbacks to give us an inside look at who Billy Beane really is, and how desperate he has become to succeed. I tried my hardest to look for issues, but I really couldn’t find any, other than the fact that it may wane in story towards the end. I don’t think that this is a perfect release, but I do think that it is one to put on a list of “most recommended.” I recommend anyone to see this movie because you will not be displeased. If you are, then I don’t know what your problem is. FINAL SCORE: 97%= Juicy Popcorn

One response to ““Moneyball””