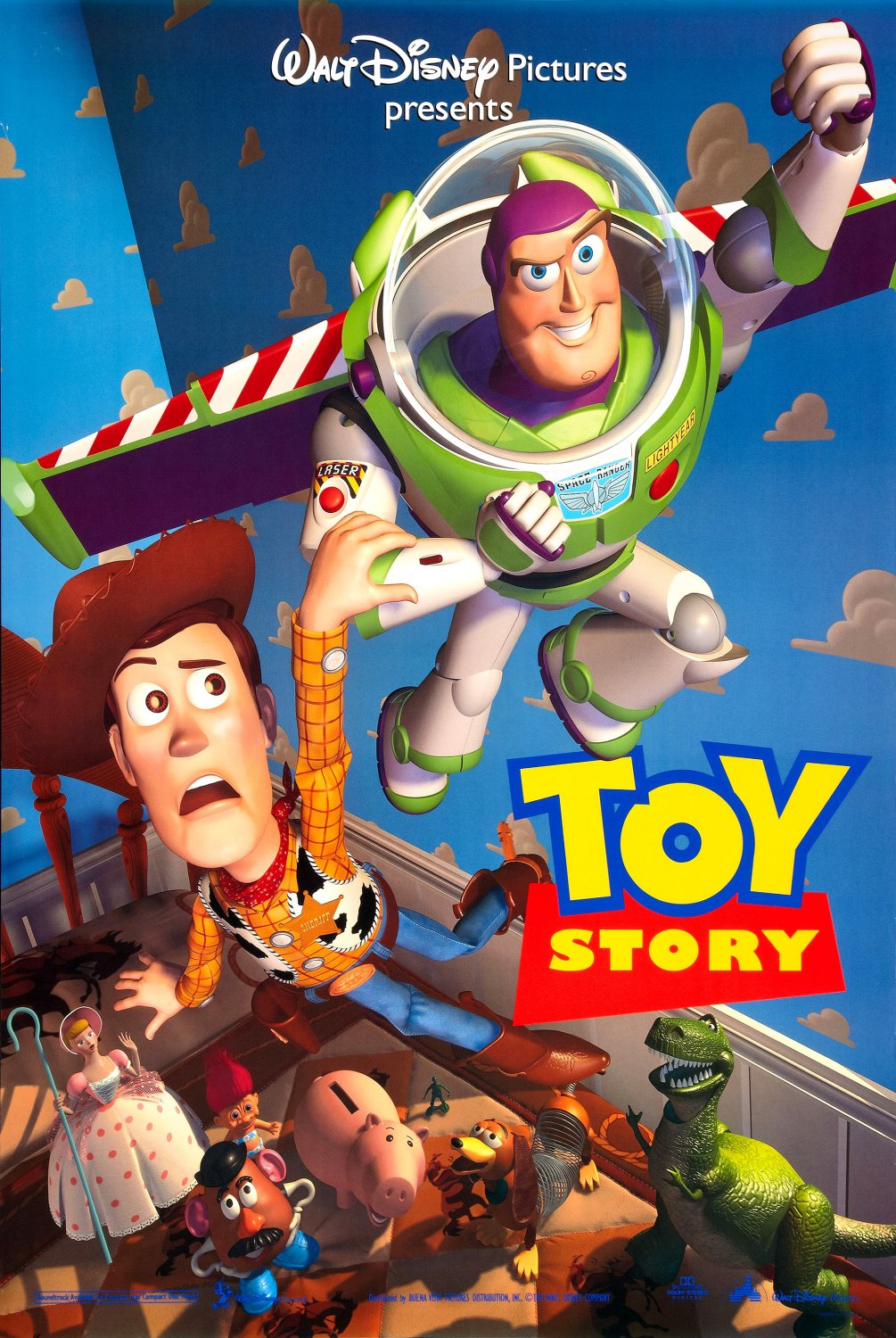 PIXAR MASTERPIECE REVIEW: “Toy Story” is voiced by Tom Hanks (Forrest Gump, Captain Phillips), Tim Allen (The Santa Clause, Wild Hogs), Don Rickles (Casino, CPO Sharkey [TV series]), Jim Varney (Ernest Goes to Camp, The Beverly Hillbillies [1993]), Wallace Shawn (The Princess Bride, The Haunted Mansion), John Ratzenberger (Cheers [TV series], The Village Barbershop), Annie Potts (Designing Women [TV series], Ghostbusters [1984]), John Morris (The Nightmare Before Christmas, Medusa), Erik von Detten (The Princess Diaries, Brink!), Laurie Metcalf (Roseanne [TV series], Stop-Loss), and R. Lee Ermey (Full Metal Jacket, Se7en). It is directed by John Lasseter (Cars, A Bug’s Life), who also co-wrote it with Pete Docter (Inside Out [2015], Up), Andrew Stanton (Finding Nemo, John Carter), and John Ranft (The Lion King, Beauty and the Beast [1991]), while the screenplay was written by Joss Whedon (The Avengers, Alien: Resurrection), Joel Cohen (Evan Almighty, Garfield [2004]), Andrew Stanton, and Alec Sokolow (Daddy Day Camp, Money Talks). In a world where toys are alive and can speak, one cowboy figure named Woody (Hanks) is in for trouble when his owner, Andy (Morris), acquires a new action figure known as Buzz Lightyear (Allen). Buzz is a superior toy to Woody, making him jealous of the fact that Andy plays with him so much. Because of his jealousy, Woody does all that he can to get rid of Buzz, but the consequences of his actions prove to be severe. 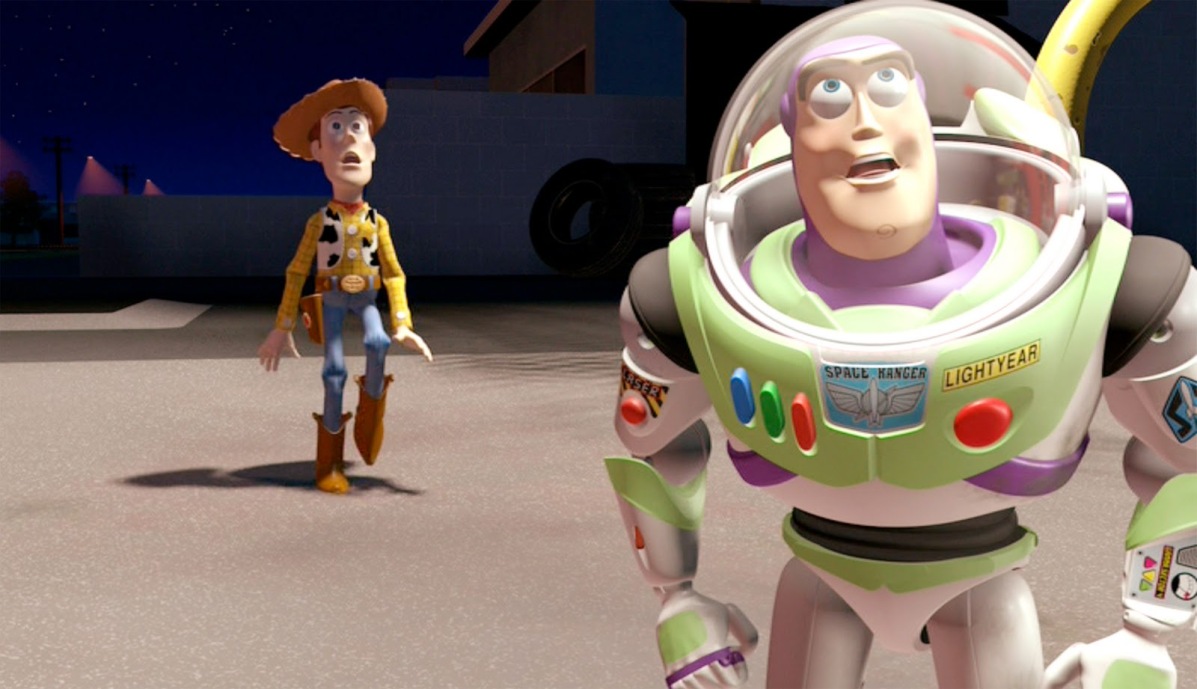 Starting this Pixar marathon is the beloved “Toy Story.” Like many people my age or a little older/younger, I grew up on this film. It was the bread and butter of animated movies; what every animated feature wanted to be. I collected many of the merchandise, the DVDs, and some costumes. It is such an enriching story that appealed to me on a monumental level as a kid and it still does now, just in a new light. Sitting down to relive this adventure once again, I was surprised to find many adult jokes and dark elements. What do I mean by dark elements? Cannibalism, murder, and torture to name a few. Yes folks, this can be a pretty messed up movie when thinking too much on it. But, you know what? I still loved the heck out of it. Not because I’m a creep, but because it’s extremely rare to find an animated film on this caliber, one to make bold decisions that both adults and kids can take part in. Watching this again not only brought back old memories, but also created new ones as, like I stated before, I saw this with completely different eyes; ones that didn’t watch this because it was a cartoon or it was funny, but rather because it is interesting and inventive. Before “Toy Story,” feature films that were animated were done in traditional 2-D animation. Although I am a fan of the older style, “Toy Story” broke ground that needed to be shaken up. I don’t know where we would be without it, but I’m glad we have it, as 3-D animating unlocks many new and creative ways to bring a character to life. Speaking of which, let’s see what gives this release its pop. When not looking at the animation itself, one can take pure enjoyment out of the story. It’s a plot of jealousy, revenge, and how it can take someone far into uncharted territory. Woody and Buzz’s adventure is not only fun, but also insightful and written masterfully. Their chemistry was fantastic and seeing Woody try to get rid of Buzz was both sad and funny at the same time (Buzz on the other hand had no clue). I guess, in a way, some people out there can relate to Woody’s dilemma. It’s like an only child getting a baby brother/sister. A lot of attention has to go to that new kid, so in turn the oldest can get jealous. I’m not saying that I dealt with this, but it is a good example that comes to my head. Many people can take different lessons from this; either way, we can all agree that this film is deep and well-thought-out. It’s not like these animators and writers created a 3-D animated feature just because it was new and anyone would like it no matter the story. They took the time and effort to make a plot worth talking about, and that is what made this film such a classic. The many characters in this move the story along at a nice, smooth pace. I enjoyed watching all of them, with my favorite character being Woody (I don’t know why). Each of them were voiced by incredible actors and they all give these figures life. And my goodness, were they funny. I laughed quite a bit at this film for the dialogue is spectacular. On top of that, the musical score is also great. Randy Newman did an awesome job composing it and singing the songs that were in the movie, including “You’ve Got a Friend in Me” and “Strange Things.” You can’t go wrong with Newman. This film is such a well-rounded experience, offering a bit of everything to everyone, which blends perfectly together. As for the animation, I will admit to it being a bit crude nowadays. What can you expect when comparing it to today’s standards? “Toy Story” was essentially the foundation of 3-D animated movies, so it wouldn’t be surprising to see it in the shape it is in. However, I found its old and simple ways to be special. Sure, it can be crude, but it gives the plot its flavor, and I got to admit that it is still good animation. When I say crude, I just mean that it doesn’t match today’s work; it’s not like I cringed at it, because it is in fact good. It holds up relatively well, and I find its age to give more appeal. Looking at the problems of this feature, it is difficult. There were a few things that I nitpicked, ranging from a story element to an animation goof, but they were all rather minor. I always find it troubling in giving a movie a perfect score, as I can either regret not doing so or that I did it. Admittedly, the films I gave the perfect rating to weren’t perfect. They were just the best of the best, and I want to make it nearly impossible for movies to get to that point. “Toy Story” is close to my heart and forever will be. It’s hard to beat childhood favorites and nostalgia, but the thing is, this thing far exceeds nostalgia. It’s one of those releases you can look back on and still find brilliant, because it is. Pixar did an astounding job in crafting such an amazing story, and if you haven’t seen this, then drop what you are doing and watch it! You will not be disappointed. With all of that said, to infinite and beyond! FINAL SCORE: 100%= Juicy Popcorn

Being that this is a Double Review, here my analysis of the Pixar short film, “Tin Toy.” 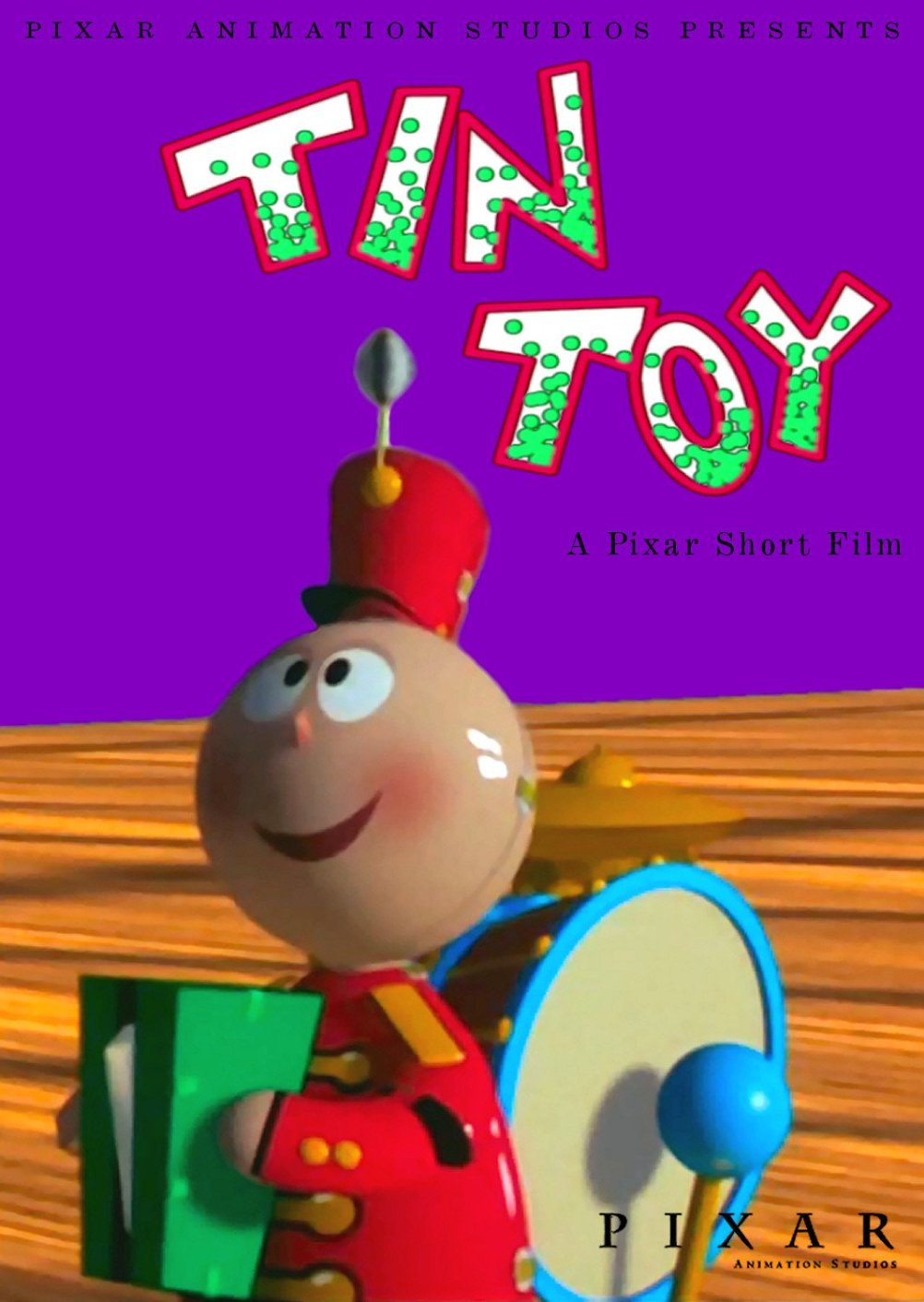 MOVIE SHORT REVIEW: “Tin Toy” is a 1988 short film written and directed by John Lasseter. It surrounds a one-mand-band toy as he tries to escape the clutches of a scary baby who plans to mishandle him. 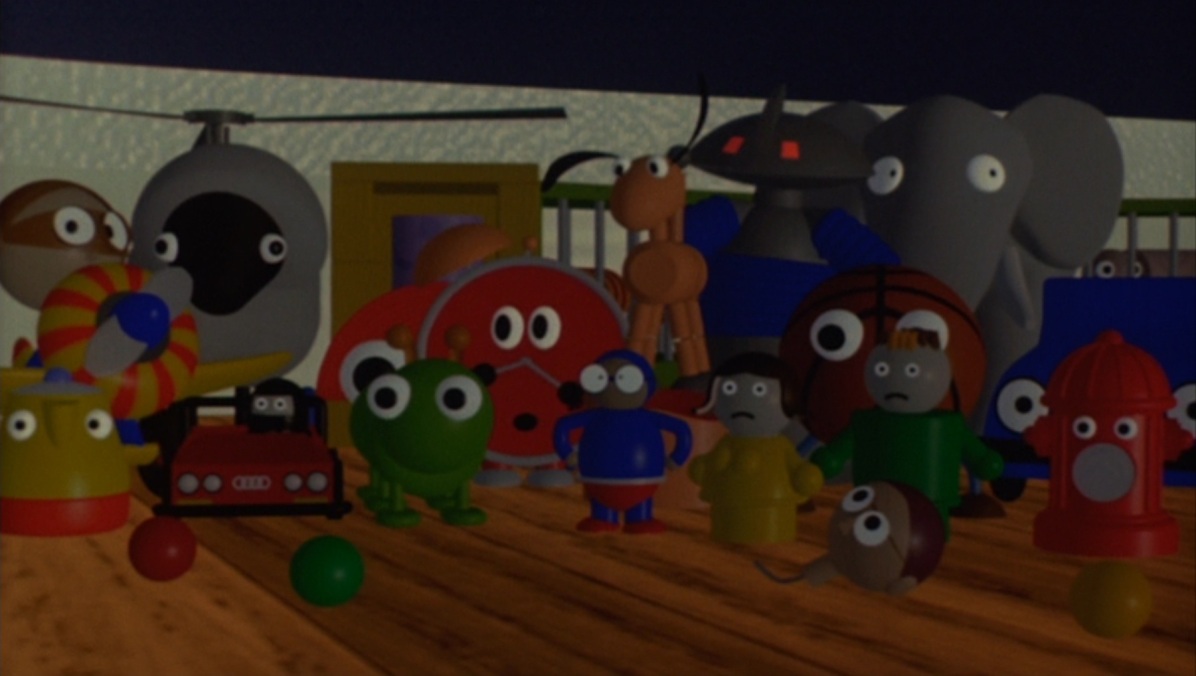 Although “Toy Story” never had a short film play before its screening in theaters, there was one included in its DVD release, entitled “Tin Toy.” It seemed fitting to review it alongside the movie being as how they both involve toys and trying to cheer up kids. Looking at the plot, it is rather simple. We see a toy freak out when it sees a baby approaching it, as babies have no regard for how they treat their toys. It’s not like this tries to give a message, but it is interesting. This short was formulated in Pixar’s early stages (it wasn’t their first short though) and it’s always cool to see how far they’ve come. Something weird about this story, however, is how it feels like the inspiration for a piece of “Toy Story 3.” A new toy is thrown into the ring with a baby, tries to cower and finds that other toys do the same. It was basically Sunnyside, but thinking about this piqued my interest more in how this and “Toy Story 3” came to be. I thought that, overall, this was a nice short. It’s simple, to the point, and gives a funny conclusion. The animation was incredibly prehistoric in terms of quality, but like “Toy Story,” this adds flavor to the experience as I enjoy seeing how far we’ve come (even though that baby looked like a demonic old man). If you are a Pixar fan or interested in seeing old animated shorts that show the company’s progress (or for pure enjoyment), you should check this one out. FINAL SCORE: 77%= Juicy Popcorn

Here is the full short: