PIXAR MASTERPIECE REVIEW: “Brave” is voiced by Kelly MacDonald (No Country for Old Men, Transpotting), Billy Connolly (The Last Samurai, The Boondock Saints), Emma Thompson (Sense and Sensibility, Love Actually), Julie Walters (Brooklyn, Harry Potter and the Deathly Hallows: Part 1), Robbie Coltrane (Harry Potter and the Sorcerer’s Stone, GoldenEye), Kevin McKidd (Grey’s Anatomy [TV series], Kingdom of Heaven), Craig Ferguson (Winnie the Pooh [2011], Trust Me), and John Ratzenberger (Cheers [TV series], Grace of God). It is directed by Mark Andrews (One Man Band [Short], Violet [Short]), Brenda Chapman (The Prince of Egypt, The Lion King), and Steve Purcell (Toy Story That Time Forgot [TV short]), while all of them wrote it with Irene Mecchi (Hercules [1997], The Hunchback of Notre Dame). Merida (MacDonald), a princess living in older Scotland who would rather prefer hunting and archery than a woman’s job, goes off into the woods in search of magic that would “change her fate” and help her follow the path she wants to.

For the longest time, I have regarded “Brave” as my second least favorite Pixar film (“Cars 2” taking the prize spot of worst, respectively). When I saw this in theaters back in 2012, I was expecting a much different movie from what I actually witnessed. The trailers suggested a different story, as I didn’t think it would be about a princess trying to protect her mother who has turned into a bear. Seeing it for the first time was a disappointment. When trailers offer me one thing and I receive something else, I tend to get furious (look at what I gave “3 Days to Kill”). However, that should be the trailer’s fault, not the film’s. So, in revisiting this release, I saw it in a new light. I knew what I was getting into, and any inclination of an alternate plot wasn’t present. And so, my new overall reaction of this feature is a pretty good one. Set in Scotland, this storyline is brought to life with a terrific location, musical score, and atmosphere. I loved the high plains with stone fortresses and endless trees. It made for a visually stunning experience, even if the animation for the characters doesn’t blow me away like usual in Pixar releases. The feel of this adventure is quite different from what the company has done before, as this is more of a culture piece than an out-of-the-box film. With that comes the heritage and rules of older Scotland, which this movie focuses entirely on. The plot is basically about a girl who doesn’t want to follow the Scottish way of life for a princess and attempts to “change her fate.” It’s interesting, although predictable. One can figure out the outcome of the matter right away, and it’s not like this is the first feature to showcase this conflict. Thankfully, there’s a lot to be offered in this story, as it is funny and tackles a specific theme. Besides the minuscule lesson of women being as fierce as men, there’s a bigger theme in this that deals with fate. I’m always interested in the subject of fate and destiny, and although this one isn’t the best film to focus on those, it does an okay job anyway. I’ve stated in my “Forrest Gump” review (I think) that I’m like Forrest in that I’m in the middle on talking about fate. We are all on a path that has the end made up for us already, but it’s our decisions that get us there. I’m not going to spoil the outcome of this film, but Merida is having trouble in dealing with her fate as a princess, so this sets up a good plot to follow. It does tend to sway away from this mindset, however, and hand us more lighthearted moments, like Merida teaching her mother how to fish, but I think that they are what keeps the story from falling apart. That and the incredible voice acting. Since this is set in Scotland, we need Scottish voice actors (or ones who can pull off a good accent), so the way our characters speak is fun in itself. I find myself quoting this film at times just so I can talk in a Scottish accent because of how entertaining it is. The characters themselves were pretty good. Merida and her mother are really the only figures that are developed in this release, while the other characters, being mostly male, are the comic relief. It doesn’t bother me all of the time, considering how awesome the guy characters are, and the fact that they get the most jokes is even better. It’s just that sometimes it can be frustrating how there is not a single bright male character in this who isn’t a child. That’s just me though, and I won’t go into further discussion on it. However, I will put it as a con, being that it does bother me at times. Speaking of issues, let me tell you why this doesn’t exceed to the top of Pixar’s entries. My biggest problem with this is how it doesn’t feel like a Pixar film, but rather a Disney princess one. Like I said before, this company tends to make features that are out-of-the-box, so when something like this comes along, I can’t help but think it’s Disney’s influence. It feels like a generic (yet good) entry into the princess franchise, and it doesn’t sit well with me thinking about that. Although it is a very good movie, I could never tell you that it was Pixar if you took off their logo. Not in a million years. My next, and last, issue deals with how the plot is all over the place. It has a good theme that ties it together, but there are many elements that are crammed into this. You have Merida wanting to stray away from her mom’s rules, her mom turning into a bear, trying to keep four clans together, an ancient story about Mor’Du that arises later, and some magical beings that are mysterious in guiding Merida. So much stuff, and at times I can sense that not all of them are under control. They all have to get a fair share of the spotlight, so certain plot arcs are dropped to give light to other ones for a few minutes. It’s not awful, but it is incredibly noticeable. In the end, this is a solid and entertaining animated film. Although it doesn’t feel like it’s Pixar’s, I did have fun and even laughed for a good portion of the runtime. FINAL SCORE: 81%= Juicy Popcorn

Below is my review for the Pixar short film, “La Luna”: 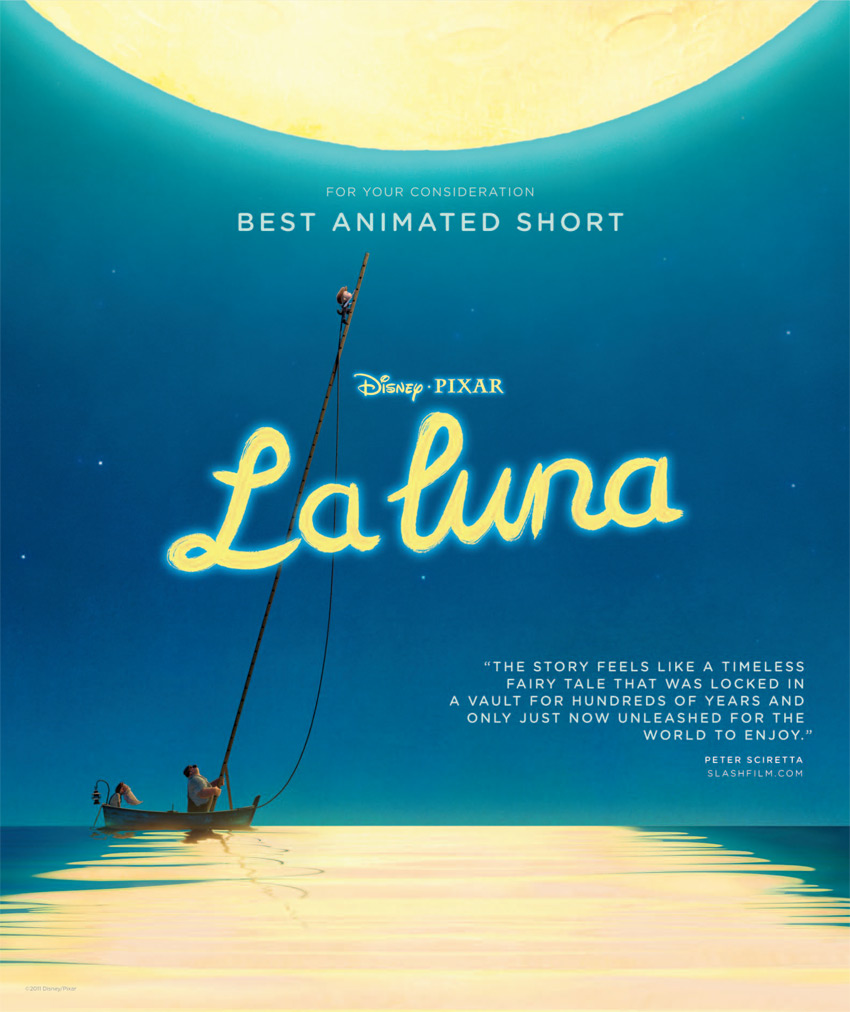 MOVIE SHORT REVIEW: “La Luna” is a 2011 Pixar short that is voiced by Krista Sheffler (Calendar Confloption [Short], My Movie Girl), Tony Fecile (Ratatouille, The Good Dinosaur), and Phil Sheridan. It is written and directed by Enrico Casarosa, and follows two men and a boy as they take a journey to the moon in order to sweep the stars that have fallen on it.

I do say that Pixar has original ideas a lot, but I have to restate that again with this short film. “La Luna” is one of the most original and captivating shorts that they have released thus far. Even though nothing was said or explained, I couldn’t help but feel engaged in what was going on. Three generations of moon sweepers who dust off some of the light on the moon is so interesting and new. The art style and visuals in this are amazing, and the musical score (done by Michael Giacchino) is fantastic. It was odd watching this come together and seeing the outcome of it all, as it really didn’t speak anything to me. I was just given an insight to a strange way of life that I will never forget. The ending is predictable, which would be my biggest issue, but overall I had a wonderful time seeing this. If you haven’t gotten the chance to watch this short film, I recommend you do, for it is a fresh and unique idea. FINAL SCORE: 94%= Juicy Popcorn

Here is the short:

One response to ““Brave” Double Review”