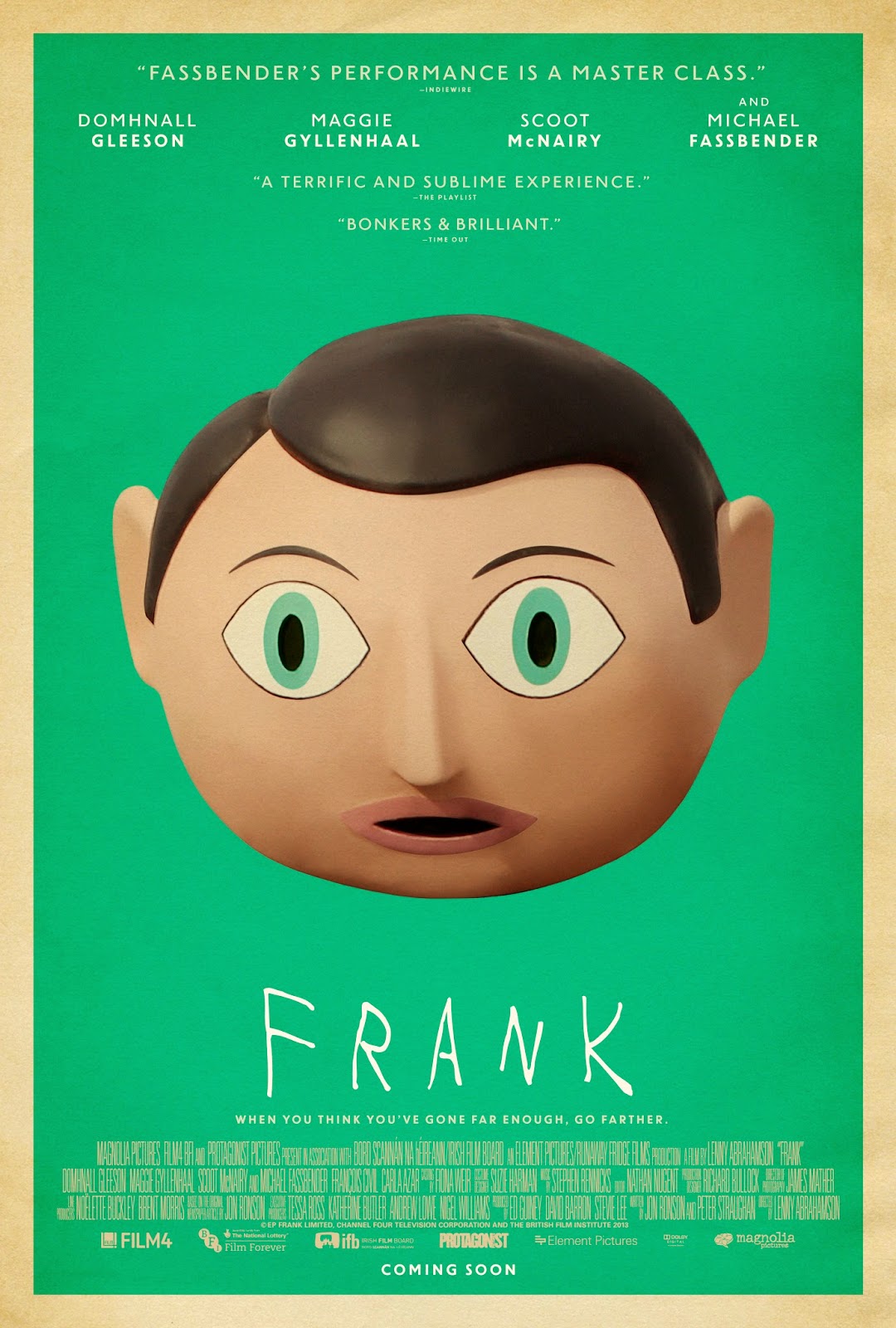 SATURDAY NIGHT MOVIE REVIEW: I didn’t get to see a movie Friday night, but luckily I watched one yesterday; that being “Frank,” which stars Domhnall Gleeson (Ex Machina, Star Wars: Episode VII- The Force Awakens), Michael Fassbender (Slow West, X-Men: First Class), Maggie Gyllenhaal (The Dark Knight, Donnie Darko), Scoot McNairy (12 Years a Slave, Argo), Francois Civil (As Above So Below, Five), and Carla Azar (Sucker Punch, The Air I Breathe). It is directed by Lenny Abrahamson (Room, What Richard Did), and is written by Jon Ronson (The Men Who Stare at Goats, Stanley Kubrick’s Boxes) and Peter Straughan (Tinker Tailor Soldier Spy, The Debt). Amateur songwriter Jon Burroughs (Gleeson) gets lucky when he is inducted into an unknown band led by the mysterious man with a huge head, Frank (Fassbender). Little does he know how insane this band is, and how it will affect him when working with the members. 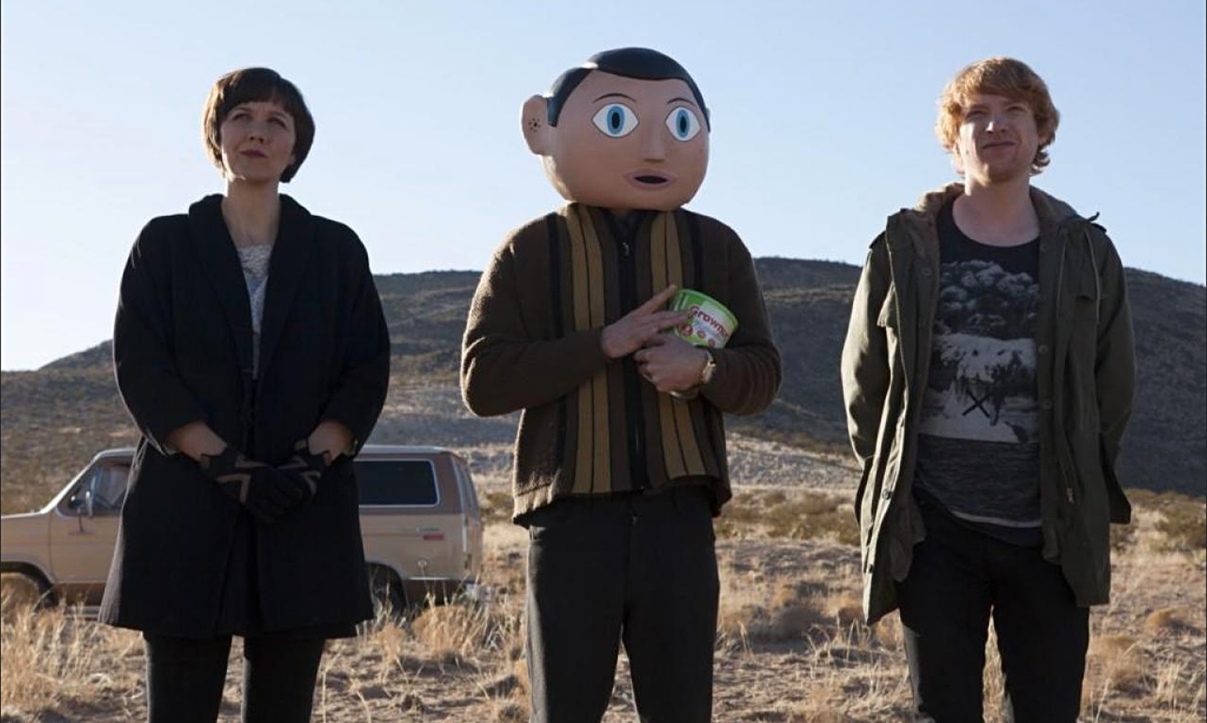 It seems as though I have hit a pocket of odd films this year, adding “Frank” to the list of weird titles. The moment I saw the trailer, I was game to see it. Never before had I even heard of it, and am surprised I haven’t, considering how I love movies like this. Ones that are original and have a smart undertone even though they come off as bizarre. That’s exactly what this film boasts, and I was in for quite the ride. From the first scene, I could tell that this was Indie (why wouldn’t it be?). We are bestowed a rather normal main character, Jon, who is trying to find his voice in the world through music, but has trouble finding the right song. Although his name isn’t Frank, he soon runs into the titular figure when he is given the opportunity to be a part of his unique and eccentric band, and I use those adjectives lightly when talking about them. They are in fact a bunch of weirdos who use anything for sound in order to conjure up music that is trash. Many times throughout its runtime I questioned what this movie really is, as I do with the films like it, such as “Gentlemen Broncos” and “Swiss Army Man.” You have to question it, especially whenever you witness scenes that make you assess your sanity. Not that this release is completely insane, because it actually has a meaning behind it. One that I found to be terrific. For the longest time I found difficulty in choosing the good guy. Sometimes it will be Jon and others it’s Frank or his band mates. There’s no one to root for because of the mess that they are in once they collide. I truly admired the deterioration of Jon as I watched this movie. Without spoilers, I will tell you that his character changes a few times because of certain elements that get to him. Even though I could predict the results of his actions, I loved seeing them unfold and how it took a toll on those around him. There’s a deep message that this feature plays out. One that I could comprehend, but not explain in detail because of how in-depth it is. Those who aren’t fans of this kind of genre won’t grasp it, but if you enjoy weird, yet provocative films, you’ll understand. Aside from the story, the acting is great. Domhnall Gleeson is becoming more and more of a favorite of mine after seeing his performance in “Ex Machina” and “The Force Awakens.” He brings a lot to the table with John, and seeing this band through his eyes was interesting. Michael Fassbender didn’t have much to work with since he wore a huge head for the majority of the film, but he gave such an odd, yet wise presence that you can’t help but enjoy watching him, and when you get to know his character, the story gets even better. The rest of the cast was really good too, and even though I didn’t take too kindly to Maggie Gyllenhaal’s performance, she portrayed a character who you were supposed to hate. The cinematography and location that this was set in was basic, yet rough as our characters spend most of their time away from the public, working on their album in a secluded farm side. The album itself was so bizarre to listen to. They didn’t really complete it or play a full song (except for one), but whenever they played, although it was odd, I was mesmerized. Something about the conflicting noises blending horribly together made me lose my train of thought when watching it and get sucked right in. There’s so many things to think on and discuss after viewing this flick. The more I think about it, the better it gets, but it does have its issues. One would be how for a good portion of the film the story wasn’t going anywhere. It was mainly just a journey filled with some quick editing and zany moments. When they hit the dialogue amongst the characters it was interesting, and once the conflict towards the end arose it became great, making up for the wait to it (but I’ll still list it as a small con). Anything else would consist of my general liking towards scenes. Some would drag, while others are terrific. No matter the iffy parts, the overall product is amazing, and anyone who is interested in crazy features like this should watch it whenever they get the chance. FINAL SCORE: 90%= Juicy Popcorn