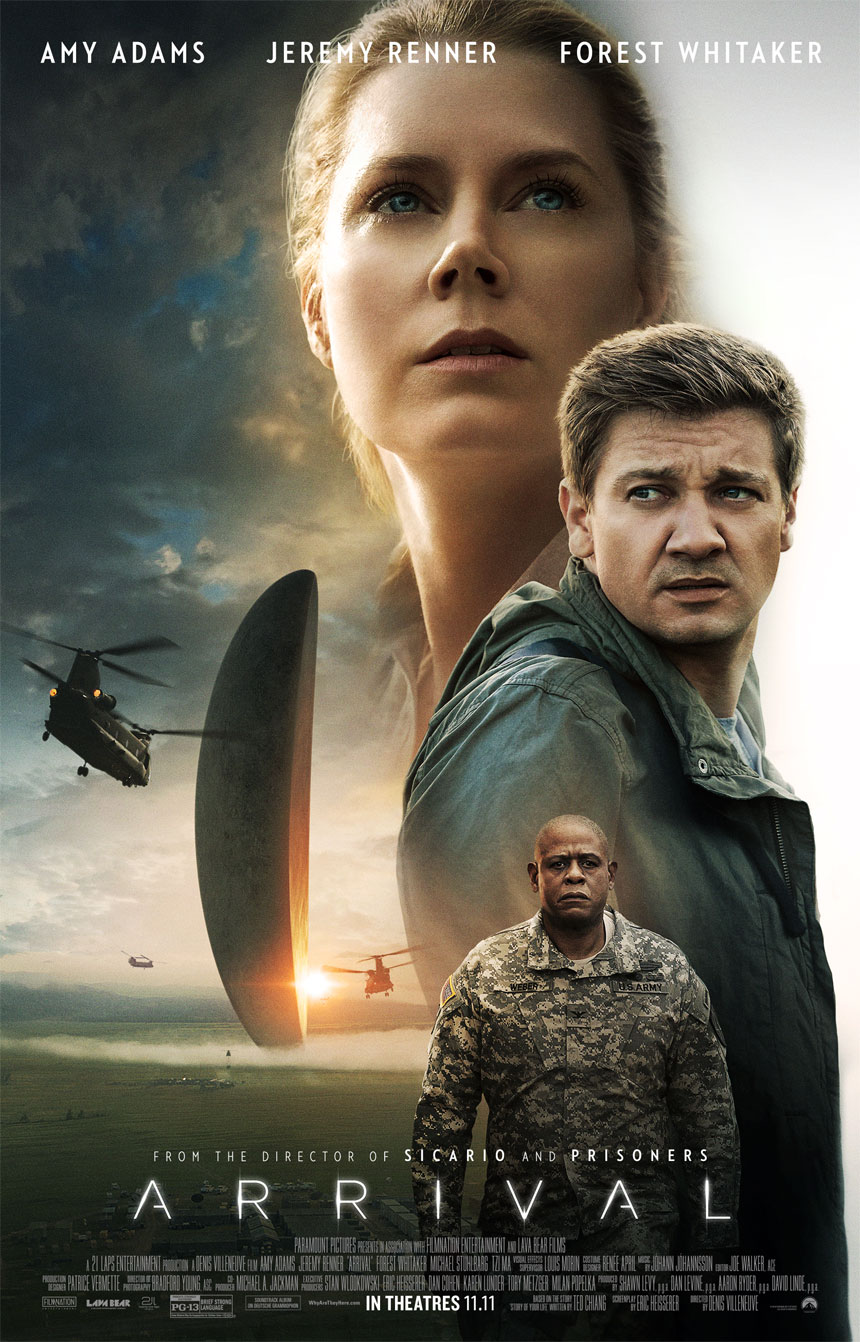 FRIDAY NIGHT MOVIE REVIEW: Last night, I saw “Arrival,” which stars Amy Adams (Batman v. Superman: Dawn of Justice, American Hustle), Jeremy Renner (The Bourne Legacy, The Avengers), Forest Whitaker (Rogue One, Phenomenon), Michael Stuhlbarg (Trumbo, Cut Bank), Mark O’Brien (Halt and Catch Fire [TV series], The Last Tycoon), and Tzi Ma (Rush Hour, The Ladykillers). It is directed by Denis Villeneuve (Sicario, Enemy), with the screenplay being written by Eric Heisserer (The Thing [2011], Lights Out). After twelve extraterrestrial spacecraft land on earth, a language professor is contracted to communicate with the aliens onboard in an attempt to figure out why they have come to our planet. 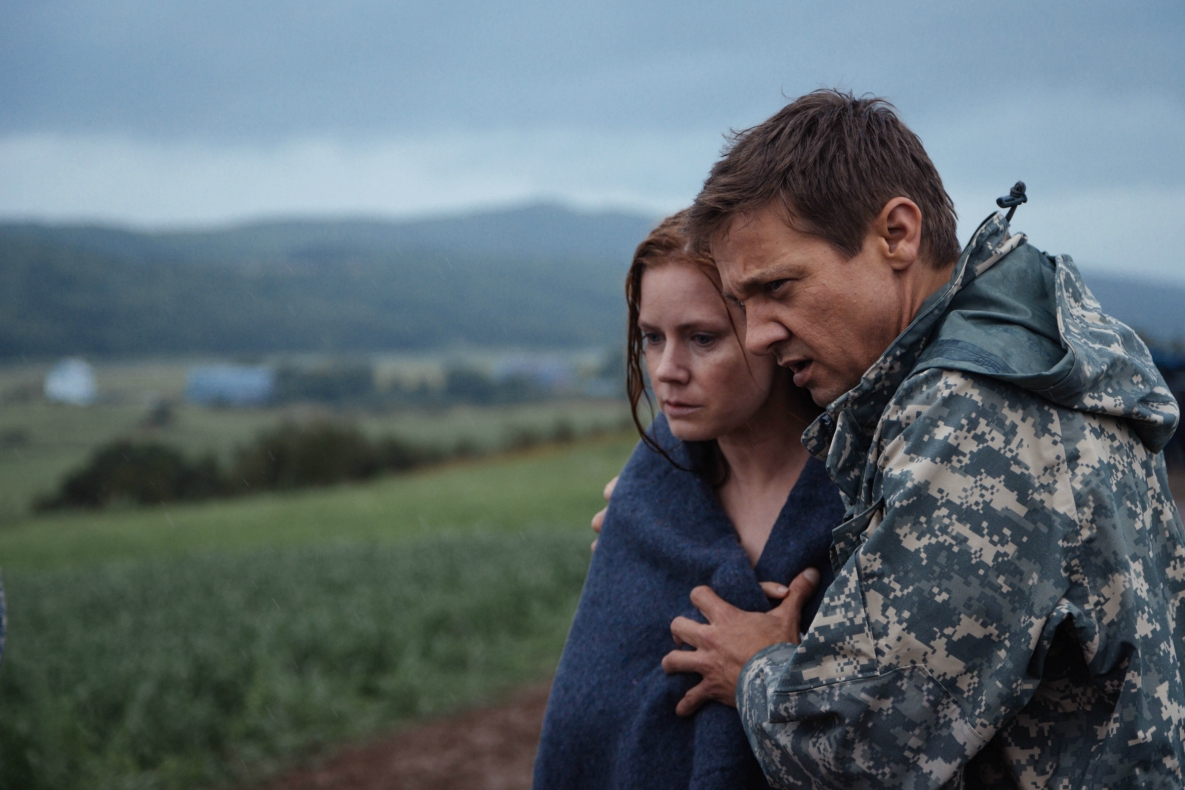 “Arrival” is a sci-fi film that flew under the radar for me when it was released last year. Though the premiere teaser was incredibly interesting/chilling, it soon fell into a slump with marketing as I believed it to be yet another movie about the government and aliens. It’s not like I don’t enjoy watching that subcategory. Heck, I love watching “The X-Files” and look forward to “Alien: Covenant.” For some reason, this one just slipped through my fingers, and I found myself being biased against it when I saw it last Friday. Why? I have no clue. The director of this is one I am trying to see more films from, the cast is great, and the genre is right up my alley. It may have been because, besides one person, I have heard very little feedback from it, let alone high praise from people around me. That’s not to say that I need a film to be loved by many in order to appreciate it. Something just happened to rub me the wrong way when the time came to watch this; it could’ve been because I was really sick as well, and it made the viewing experience a bit more challenging (that reason makes more sense than the first). Either way, after watching this picture, I was proved sorely wrong, for this is one of the best science fiction films to come out of cinema in the recent years. That’s a bold claim, I know, but hear me out on this. The concept that “Arrival” boasts isn’t anything too special. I mean, it is about some scientists who must study aliens and figure out why they came to earth. It’s been said and done in cinema many times, with the exception of the design of spacecraft and aliens themselves. However, what comes out of this simplistic idea is unique, changing not only the drive of the story but how you view it as a whole. Without going into spoilers, I will say that I was completely shocked, and it made the experience a heck of a lot more original and great. The theme of this story is essentially language, and how it bridges gaps in society, or in this case, between mankind and the alien race they are trying to figure out. Watching this journey that Amy Adams’ character has to go through, both in her character development and trying to understand the aliens, was intriguing. The science behind what they are doing had to be one of the best parts of this film, besides the twist. Not all viewers will get a kick out of it, for I can see some falling to sleep, but I for one loved it. Outside of the plot itself, the acting was great. I thought all of the performances were really good, though Amy Adams was the only one who got the spotlight. Sure, Jeremy Renner and Forest Whitaker had a solid amount of screen time; Adams was just the only one given heavy development. Though I would’ve appreciated a well-rounded set of characters rather than focusing on solely one person, it fit with what this story was going for. The cinematography and direction of this release were also awesome. I loved the color grading and the way this film looked. Its unsaturated palate was fitting, and I think Villeneuve has crafted a beautifully stunning picture. On a side note, the visual effects were also fantastic. I was fascinated by the design of the aliens as well as their written language. The mechanics of their ship were also cool. Once this movie embarks on its plot twist, it definitely makes a lot of bold moves. The idea behind it has always interested me when studying the sci-fi genre, though it is one that can produce a lot of plot holes or issues. Besides one particular problem that had my head spinning, I couldn’t really pick out anything jarring with issues revolving around it’s concept, though in terms of the picture as a whole, I have another. The first thirty minutes, while holding some good scenes, takes a while to set things in motion. Really, everything takes off once they get into the ship. As a whole, this is a very well-made, shocking sci-fi release. It doesn’t stand on the level of classics, nor is it immensely bold in what it does, though it takes steps in the right direction, making itself a film worth recommending. Although my score doesn’t scream “one of the best sci-fi films to come out of cinema in recent years,” it is still great (and by the way, there aren’t many stellar science fiction flicks that have been cropping up as of late). If any of you have tastes like mine, see it now! FINAL SCORE: 94%= Juicy Popcorn