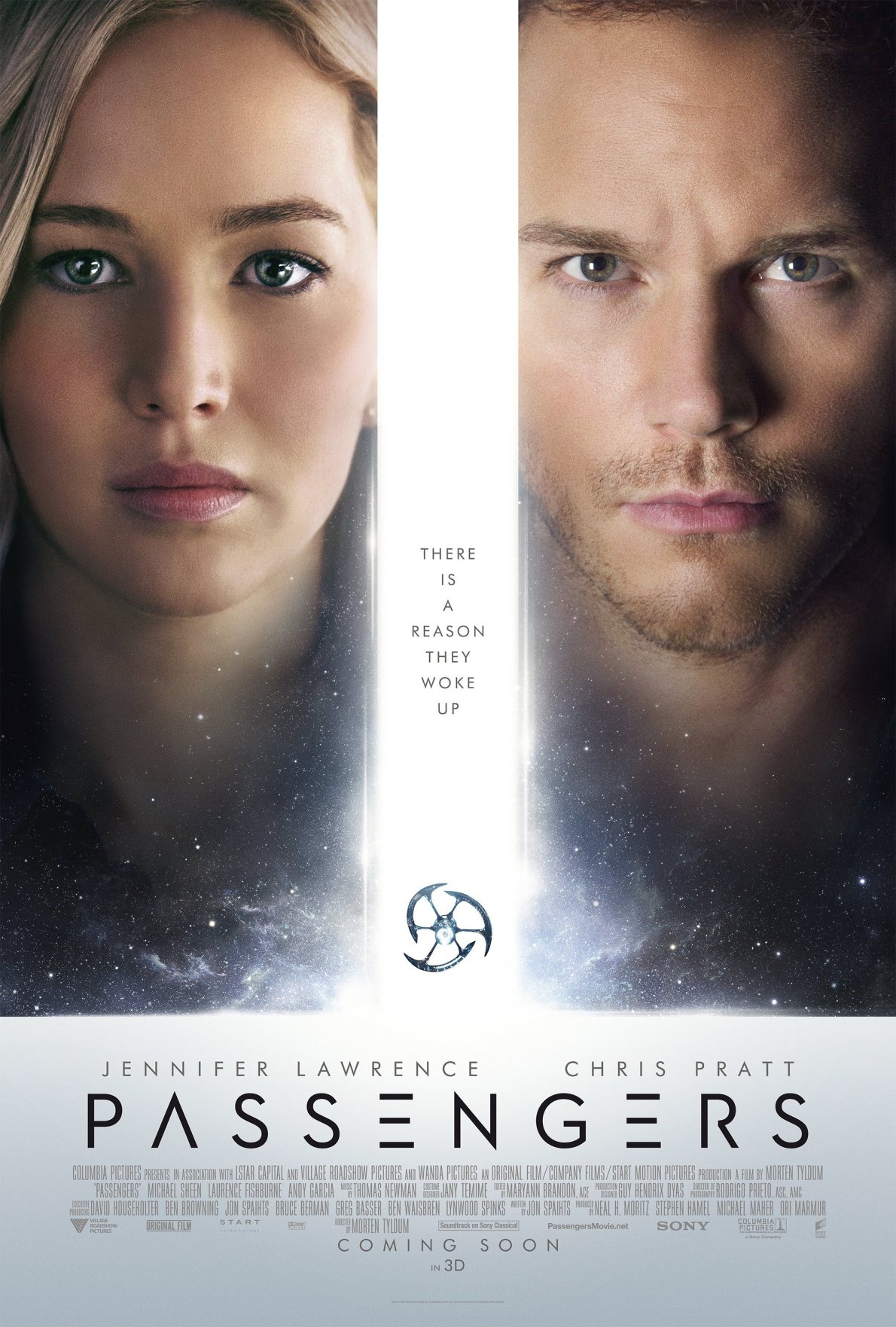 MOVIE REVIEW: “Passengers” stars Chris Pratt (Guardians of the Galaxy, Jurassic World), Jennifer Lawrence (X-Men: Days of Future Past, Silver Linings Playbook), and Michael Sheen (Midnight in Paris, Kingdom of Heaven). It is directed by Morten Tyldum (The Imitation Game, Headhunters) and written by Jon Spaihts (Prometheus, Doctor Strange). After a malfunction in a space ship carrying 5,000 people to a new earth, Jim Preston (Pratt) awakes from his hyper sleep ninety years too early. Panicking over his predicament, especially since he is the only individual awake, Jim tries to find a way to put himself back to sleep while keeping his sanity. I never thought I’d be seeing “Passengers” anytime soon, but I guess it was bound to happen. The biggish sci-fi/romance/drama starring Chris Pratt and Jennifer Lawrence, which came out sometime last December, was meant to perform big at the box office yet fell under people’s radar. When the trailers came out, I had little interest. Science fiction is my favorite genre, but the advertisements for this flick made it look like some sort of romance-driven, watered down concept of two people being stuck on a ship together. I never planned on seeing it, even when it came out for rental. However, fate brought me to it and now that I have seen it, I can say that it wasn’t as bad as I thought it was going to be. In fact, it was actually pretty solid. The trailers didn’t do this any justice after all, as what I received was a depressing, bittersweet picture of one man’s misfortune and how he drags another down with him. Between the moments of happiness and discovery lies darkness, deceit, and utter sadness, making it a rather messed up piece of entertainment. To go into it would give away spoilers and I won’t do that in case any of you want to see it. So, I’ll break this down in terms of its aesthetics. The story was heavily engaging; it may have something to do with my utter love of sci-fi and mystery, but the writers did a great job in keeping me interested throughout the runtime. It’s a fascinating concept that has old, already used elements found in films before it, interwoven into some new ideas to create something worth looking at. The design of this movie adds to the wonder factor, as the cinematography, set design, and special effects were really good. Sure, it’s filled with mostly CGI and resides in the same place (a space ship), but it looked sleek and didn’t feel too obnoxious. The small number of characters really made me feel boxed in, and often craving for more new faces as much as the main figures did. Chris Pratt and Jennifer Lawrence did a good job in their roles. I was entertained by them and thought that they served their characters well for what was written. When it came to the characters themselves, I will say that they could’ve been developed more. Pratt’s conflict embodied his character and gave him a drive, but I didn’t really get to know the guy at all besides some small details he told Lawrence’s character. Really, Lawrence was the only one given background, and while that makes for almost fifty percent of the characters onscreen, it would’ve been nice to feel more attached to everyone. The writer in this wants you to feel for these people, being as how there are some terrible realizations that unfold throughout the plot. While it is a messed up affair, I didn’t feel as deeply rooted in the characters as I wanted, making that the biggest issue with this movie. This problem can cast a shadow over the film, being as how character development is a much needed aspect in any story, so even though I don’t have many other issues with this feature, my main one is pretty big. In the end, this movie relies on its characters, especially when you realize what the big conflict is at the conclusion that has been building up throughout the plot. Once the ending was reached, it felt more like a balloon losing its air than anything. I wouldn’t say that it was a bad ending, but I will say that the build-up towards this conclusion didn’t come crashing down like I thought it would. Taking it in, I would say that it was decent for what the writer did, though I could’ve seen stronger outcomes of the story be displayed. Besides those problems, this is a solid picture. Like I stated, it looks cinematically great and the story is engaging from start to finish. It was definitely better than what I expected it to be, and if you are interested in sci-fi, I’d recommend this for you to check out. I think it deserves more than the flack it’s been given. FINAL SCORE: 84%= Juicy Popcorn