FRIDAY NIGHT MOVIE REVIEW: Last Friday, I saw the Studio Ghibli feature, “Porco Rosso,” which is voiced by Michael Keaton (Birdman: Or [The Unexpected Virtue of Ignorance], Toy Story 3), Susan Egan (Hercules [1997], Spirited Away), David Ogden Siers (M*A*S*H [TV series], Beauty and the Beast [1991]), Kimberly Williams-Paisley (Father of the Bride, According to Jim [TV series]), and Brad Garrett (Everybody Loves Raymond [TV series], Finding Nemo). It was written and directed by Hayao Miyazaki (Ponyo, Howl’s Moving Castle). Set in 1930s Italy, this film follows a seaplane bounty hunter, Porco Rosso (Keaton), who has been cursed to look like a pig. Taking down seaplane pirates for a living, his work soon catches up to Rosso, as his enemies band together to kill him, alongside an American pilot who has just blown into town. 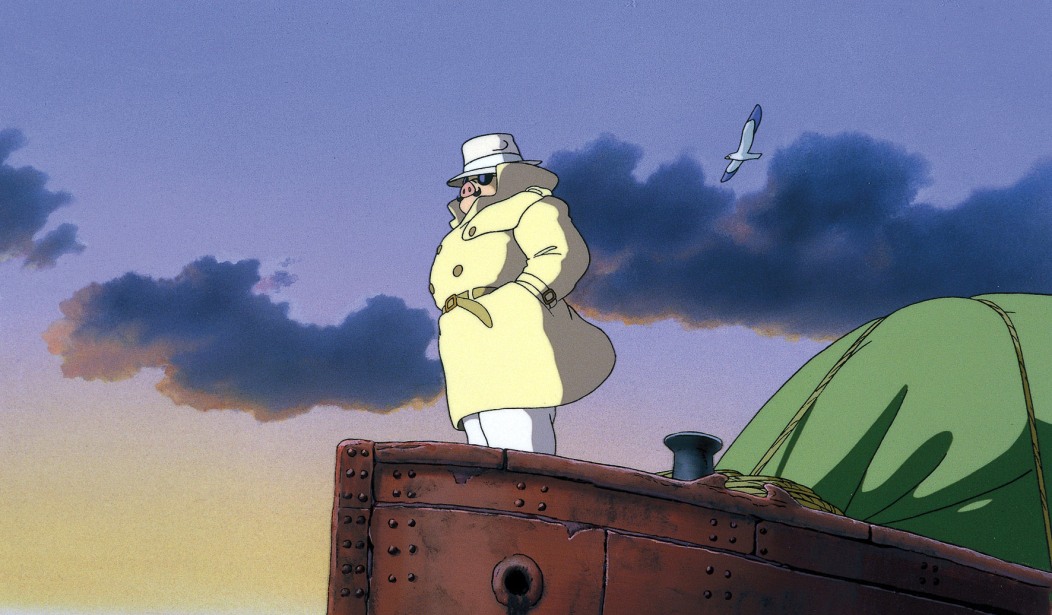 I don’t like anime. It’s an art form I never felt attracted to, nor willing to pursue in my reviews. I admire their willingness to stick to hand-drawn 2D art, such as Studio Ghibli features like “Porco Rosso,” but outside of that I don’t see the drawl. Because of this, there aren’t anime reviews on my site…until now. It’s hard not to have a bias towards certain films, which led me to block out anime pictures; but one of my brothers pushed me until I couldn’t take it any longer to see this movie about a cursed seaplane bounty hunter who looks like a pig. “Porco Rosso,” a beautifully drawn feature set in the 1930s, is the sixth property of Studio Ghibli and features a few familiar faces behind the characters of the American version I watched, namely Michael Keaton as the titular hero and Brad Garrett as one of the bad guys. I didn’t really know what to expect out of this. The trailer looked decent and the concept was strange enough to warrant a watch (honestly, most anime is weird as crap). While “Porco Rosso” is certainly not terrible in any regards, it also is a plain viewing of one man carrying out his life during a climactic moment. If there were one word to describe my experience watching this, it would be “okay.” Some may think otherwise (like my brother), but for the majority of the movie I didn’t really get the appeal, and here’s why. Mainly, the story serves as an inhale-and-exhale, taking in mounds of simple dialogue and spitting them out through rather basic scenes. It’s an observational piece on the life of a man wanting to be a loner, but what didn’t do it for me was how it was all surface level. The dialogue is playful, as if it were casually written to endear towards children and adults alike, but it hardly ever hits a home run, whether in the context of action sequences or dramatic moments. I enjoyed some of the humor that was present, such as the instances involving Brad Garrett’s character, but for the most part I felt bereft of something greater. The reason why Porco was cursed was left out of the picture; apparently Hayao Miyazaki felt it unimportant to the main storyline, which begs the question of what the main storyline actually is. There’s a lot to absorb in this, from Porco’s defiance, to his enemies trying to kill him, to a woman named Gina (Egan) waiting on him to sweep her off her feet. Some of these aspects are good while others fall by the wayside, which is not to say they are awful. Like I stated, this movie isn’t terrible. It just isn’t fulfilling. The best parts of this story involved the romance between Gina and Porco, albeit it being one-sided when it came to dialogue. I loved the scene in the garden when Gina told the American pilot about her waiting for Porco; it harkens back to classical filmmaking in terms of execution and felt elegant. The funny thing is, romance is the smallest piece to the giant puzzle that is “Porco Rosso.” Another issue (which is probably the last big point) I had was the voice acting. While it was solid in terms of delivery, the mouthing was completely odd. Most times, Porco’s lips wouldn’t even move yet he’d be talking (and this is outside of the parts where he is thinking). I don’t expect the best when it comes to English dub (no one should when any dubbing is involved in film), but I think it could’ve been polished just a bit more. There’s plenty to admire of this picture, whether it be the wonderful score or the beautiful animation. They really pulled this movie together and made it better than it would’ve been if the story was just left alone. My brother told me I would be swayed into watching anime films once I watch “Porco Rosso,” and while I don’t feel obligated to view others, I will say that Studio Ghibli fans will be entertained by this movie (if they haven’t seen it already). It has its own kind of humor and moral that takes a special audience to truly appreciate. While I did think it was an alright experience, I unfortunately am not apart of their target audience. FINAL SCORE: 71%= Burnt Popcorn