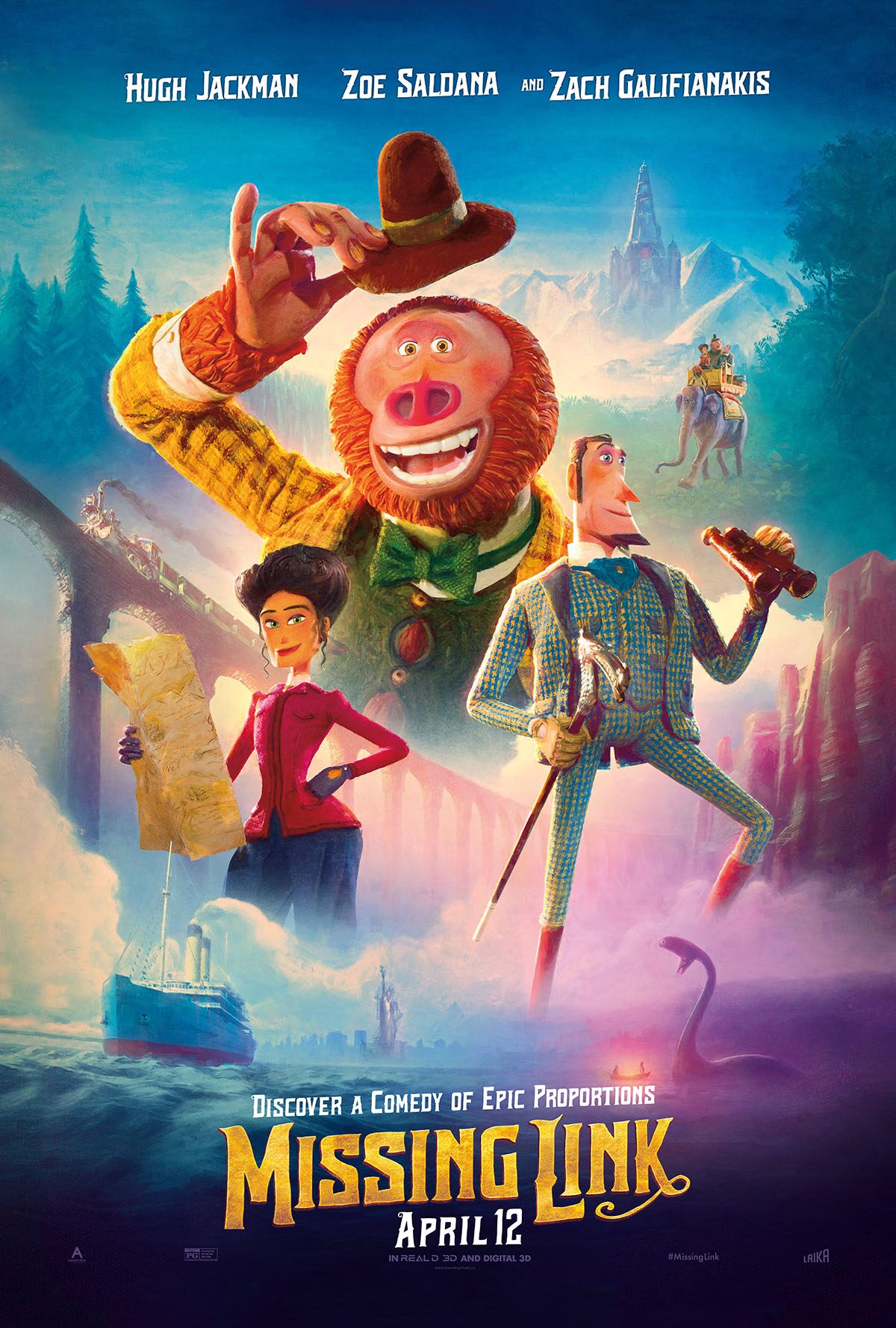 FRIDAY NIGHT MOVIE REVIEW: Last night, I saw 2019’s “Missing Link,” which is voiced by Hugh Jackman (Logan, Rise of the Guardians), Zach Galifianakis (The Hangover, Birdman or [The Unexpected Virtue of Ignorance]), Zoe Saldana (Guardians of the Galaxy, Star Trek Into Darkness), Timothy Olyphant (A Perfect Getaway, This is Where I Leave You), David Walliams (Stardust, Dinner for Schmucks), Stephen Fry (Gosford Park, V for Vendetta), Matt Lucas (Alice Through the Looking Glass, Bridesmaids), and Emma Thompson (Brave, Harry Potter and the Deathly Hallows: Part 2). It is written and directed by Chris Butler (ParaNorman, Kubo and the Two Strings). In an effort to be inducted into a high society of hunter adventurists, Sir Lionel Frost (Jackman) sets out to find a real Sasquatch (Galifianakis) and bring back evidence.

Ah yes, another Laika stop-motion feature. It’s always a treat when you hear a film with this style is hitting theaters, however I wasn’t all too impressed by the marketing of “Missing Link.” The trailers, while beautiful in their animation, seemed a bit… bland. Another term that could be used is “kiddy,” but given how Laika has done an astounding job being an arthouse for all ages, I was wanting to give them the benefit of the doubt. No, I didn’t see it in cinemas, but I recently got ahold of the rental for it. Suffice to say, I’m glad I didn’t fork over the eleven dollars. It’s always a saddening affair to see an abysmal stop-motion film. The hard work and effort put into these pieces is no easy feat (granted, any movie is hard to assemble), but I couldn’t help but grow disinterested while watching Laika’s recent effort. It’s certainly their worst picture to date, taking “Box Trolls” out of contention (since I haven’t seen it). However, that’s not to say it’s atrocious. It has its moments, but all in all “Missing Link” fails to excite, settling for basic jokes, predictable plot devices, and little character development. I don’t expect family flicks to be gutsy or bold, but I do look for creativity, and there’s not much to be found here. I didn’t care for the characters all too much and the life lessons that were meant to be learned were all too foreseeable, leaving me with next to nothing to see, besides the fantastic stop-motion. Laika went for a different style when sculpting the look of this movie; it’s something they do in every venture. I liked the color tones and character models, as well as the direction of the scenes. It’s all well put-together, and blends smoothly with its actual clay pieces and CGI. But sadly, this is all a given when you walk into a film from this studio. I expected nothing less in that regard, but was left wanting more in all other aspects. I even found myself dozing off towards the third act because everything was essentially mapped out by that point. I knew where this character would end up, and what decision that character would make. It was a listless journey without many bumps. Taking their better films like “Coraline” and “Kubo” into account, it’s as if “Missing Link” was playing it safe, opting for a minimalistic concept that has been seen before (monster hunting, Bigfoot) and not doing much to expound upon it. I laughed and was entertained at a few parts, but they were a handful. Truly, I wanted to like this; it’s the stop-motion lover inside of me that was praying it was blow me away. But alas, it didn’t. The kiddos might like it, but I’d put money down that it’ll bore the family before the kids find enjoyment in it (mainly because I saw this with my eleven-year-old brother who wasn’t all too amused). If you’re looking for stop-motion gold, find it in classics like “Fantastic Mr. Fox” or “Chicken Run.” It’s best this Sasquatch is never found. FINAL SCORE: 65%= Burnt Popcorn