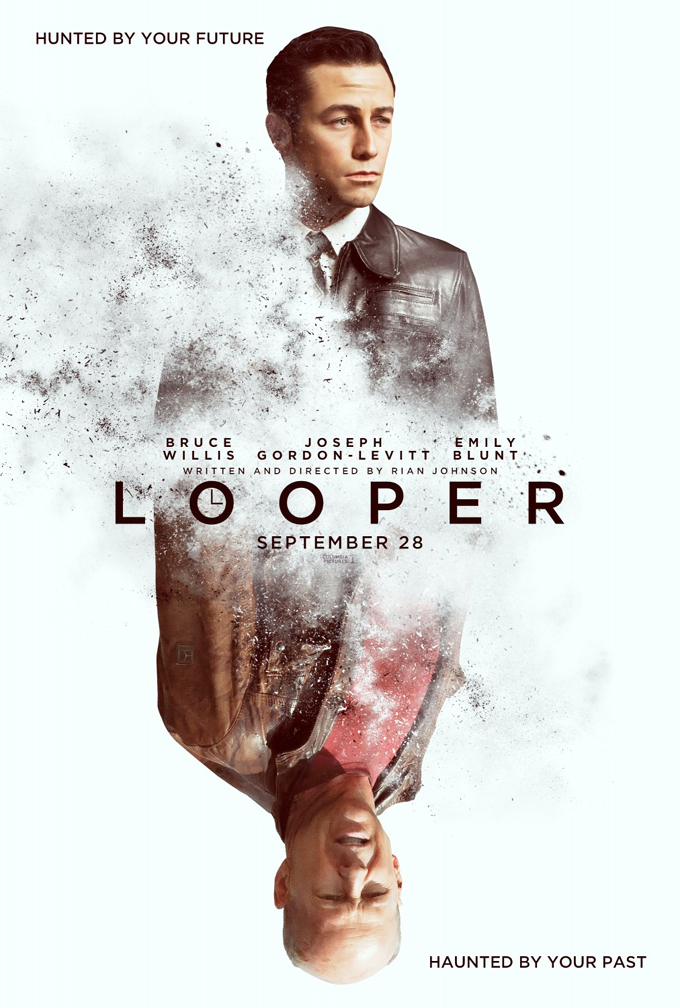 MOVIE REVIEW: “Looper” stars Joseph Gordon-Levitt ([500] Days of Summer, The Dark Knight Rises), Bruce Willis (Pulp Fiction, The Sixth Sense), Emily Blunt (Edge of Tomorrow, The Adjustment Bureau), Noah Segan (Knives Out, Star Wars: Episode VII- The Last Jedi), Pierce Gagnon (Tomorrowland, Wish I Was Here), Piper Perado (Coyote Ugly, Imagine Me & You), Paul Dano (Little Miss Sunshine, Swiss Army Man), and Jeff Daniels (The Martian, Pleasantville). It is written and directed by Rian Johnson (Knives Out, Star Wars: Episode VII- The Last Jedi). When Joe (Gordon-Levitt), a looper who kills people sent from the future by the mob, is sent his future self (Willis), he must do all he can to him before his organization gets to him first.

I have been planning to see “Looper” for the better part of three years now. Why has it taken me this long? I couldn’t tell you. That’s just the way things work. Little did I know that Mr. Rian Johnson would be the sole writer and director of it. Maybe I’ve got this guy all wrong. Sure, “The Last Jedi” was horrid, but “Knives Out” was a solid watch, and for me to be clamoring to see this older piece of his? I should put this guy on my radar for future releases. If there’s anything Johnson is good at, it’s smaller stories with intricate complexities. “Knives Out” featured an array of big stars who give life to the whodunnit story type in a unique way, much like how my viewing of “Looper” handled the time travel genre. It’s an interesting approach, one that hasn’t been done in cinema that often, especially with this kind of talent. Bruce Willis and Joseph Gordon-Levitt bring their a-game to a story that puts you on edge and leaves you dangling until the bitter end. I was heavily intrigued, from start to finish, mainly because of just how tightly wound this narrative is. Sure, when you deal with time travel pictures, you’re likely to have plot holes, but the pacing and rhythm of this story was smooth. There were even elements within the plot that seemed small but attributed to a larger cause than one might think (telekinesis). Johnson clearly had this idea in his back pocket for a while, proven by a special feature that I watched where he initially envisioned it being a short film (with Gordon-Levitt no doubt). Luckily, he got the funding to expand it, and it brought us here. I love science fiction, however truly creative, thought-provoking sci-fi is hard to come by nowadays. We’re typically dealt your usual space adventure or superhero caper. “Looper” boasts an engaging concept set in a fun futuristic world where all of its characters are broken. I think what I found to be most refreshing is I didn’t necessarily know who to root for: older or younger Joe. Both have motivations that are justifiable, and both equally do bad things. It’s a great character study, however I will preface that the younger Joe character is sorely underdeveloped. In probably my biggest flaw with the film, Gordon-Levitt’s Joe wasn’t given much time to fully be formed, mainly being placed in heavy situations that needed quick solutions. Hardly do we get to feel for him as a person, aside from his conversation about his mother. Gordon-Levitt’s performance as Joe was solid, especially in him trying to mimic the mannerisms of Willis. He made a great effort, but unfortunately his character left more to be desired, which in turn made the ending to be more underwhelming than intended. It’s not a happy conclusion, mind you, but it would’ve had bigger impact if I felt for Gordon-Levitt’s Joe more. With the older Joe, we had more set-up and bigger emotion behind what he was doing. There was certainly a bigger push, and I just wish that was transferred to younger Joe. But, besides that, this is a solid independent sci-fi. I love the concept, as well as the cinematography that captures it. “Looper” isn’t by any means conventional, nor is it pandering to all audiences. It knows what it is and plays according to its own beat. The film is a thrilling, engaging watch that’ll surely leave you thinking. If you’re looking for a good sci-fi watch, I’d recommend it. FINAL SCORE: 89%= Juicy Popcorn

One response to ““Looper””