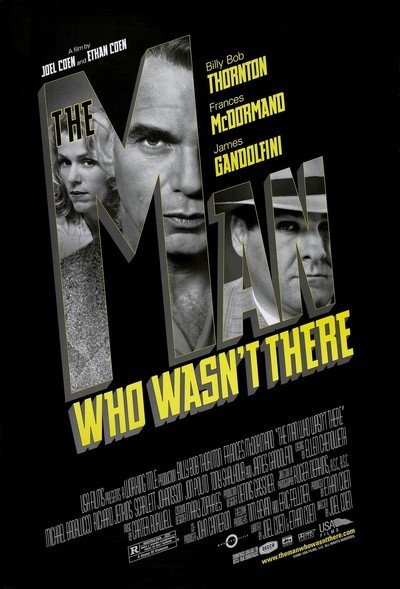 Film noir: dark, methodical, depressing, yet alluring. It’s a fun genre to play with in cinema, and the fact that the Coen brothers took it for a spin is enough to make me fork over the dough. Those of you who know these directors understand what I’m talking about. I did a marathon of their work back in the day, and am still on the quest to see the rest of their portfolio. Guess “The Man Who Wasn’t There” was the next stop. The feature is lead by the great Billy Bob Thornton; kind of an oddball in real life, but boy can he steal a show. I recently finished the first season of “Fargo” that starred him as a lethal hitman, so I somewhat expected his quiet barber role to break bad and slit some throats. Not that he did, mind you, for the role of Ed Crane is far different than his portrayal of Lorne Malvo. Crane keeps to himself and gets by in life as everyone else does. His wife’s cheating on him and his job isn’t what he wants. Needless to say, he’s served a life of mere contentment, ready to jump on to some form of special opportunity. That comes when a lowlife entrepreneur named Creighton Tolliver (Polito) walks into his life trying to sell him on a dry cleaning investment. It all goes downhill from there. In true Coen Brothers fashion, you have a dark sense of humor and an array of memorable characters who give the story life. It’s not necessarily about the story itself, but the people who inhabit them that steer the ship. And this is what will divide viewers. I can easily see people (primarily popcorn viewers) thinking this movie to be a waste of time. Once Crane’s plan spirals out of control, the plot shifts to different areas you wouldn’t expect it to. I sure didn’t, and I was wondering why the Coens were taking me down this path. It all flows into the theme expressed through Crane: following one’s desires. Rather than playing for everyone, why not play for yourself? Granted, Crane isn’t a bad guy. Just a good person who messed up. And boy does it get sad. I honestly didn’t expect it to get as depressing as it did, with a conclusion that’ll leave you really wondering “so what was I supposed to take away from this?” It’s a feature worth rewatching to better understand, something I hope to get around to in the near future. Regardless of what you may think of the story, everything surrounding it is flat-out fantastic. The performances are incredible, with notables being John Polito, Tony Shalhoub, and of course Billy Bob Thornton. Everyone stood out, there was not a dud. On top of that, the cinematography… astounding. It’s funny, because there were two shots in this movie that I recognized from one of my film classes. We had to recreate the lighting set-up to get our shots as close to the original as possible. Who shot this movie? None other than Roger Deakins. Freaking Roger Deakins. He’s the Tom Brady of cinematographers currently, and he deserves it. This is a beautiful film to watch, with shot compositions that had me salivating. Beautiful, just beautiful. I’d say it’s the best aspect of the feature. With that in mind, “The Man Who Wasn’t There” is one of the more artsy pieces the Coen brothers have turned in (that I’ve seen). The more I think on it, the better it gets, and that is always a good thing to say about a movie (even if your first impression was horrible). While it’s not my favorite from the brothers, it is certainly a wonderful picture, filled with all the right ingredients to make this critic happy. Sure, people will be divided. I can see this being a like-it-or-don’t situation, but if you are into noir, the Coen brothers, or even Billy Bob Thornton, this will be a treat. FINAL SCORE: 93%= Juicy Popcorn