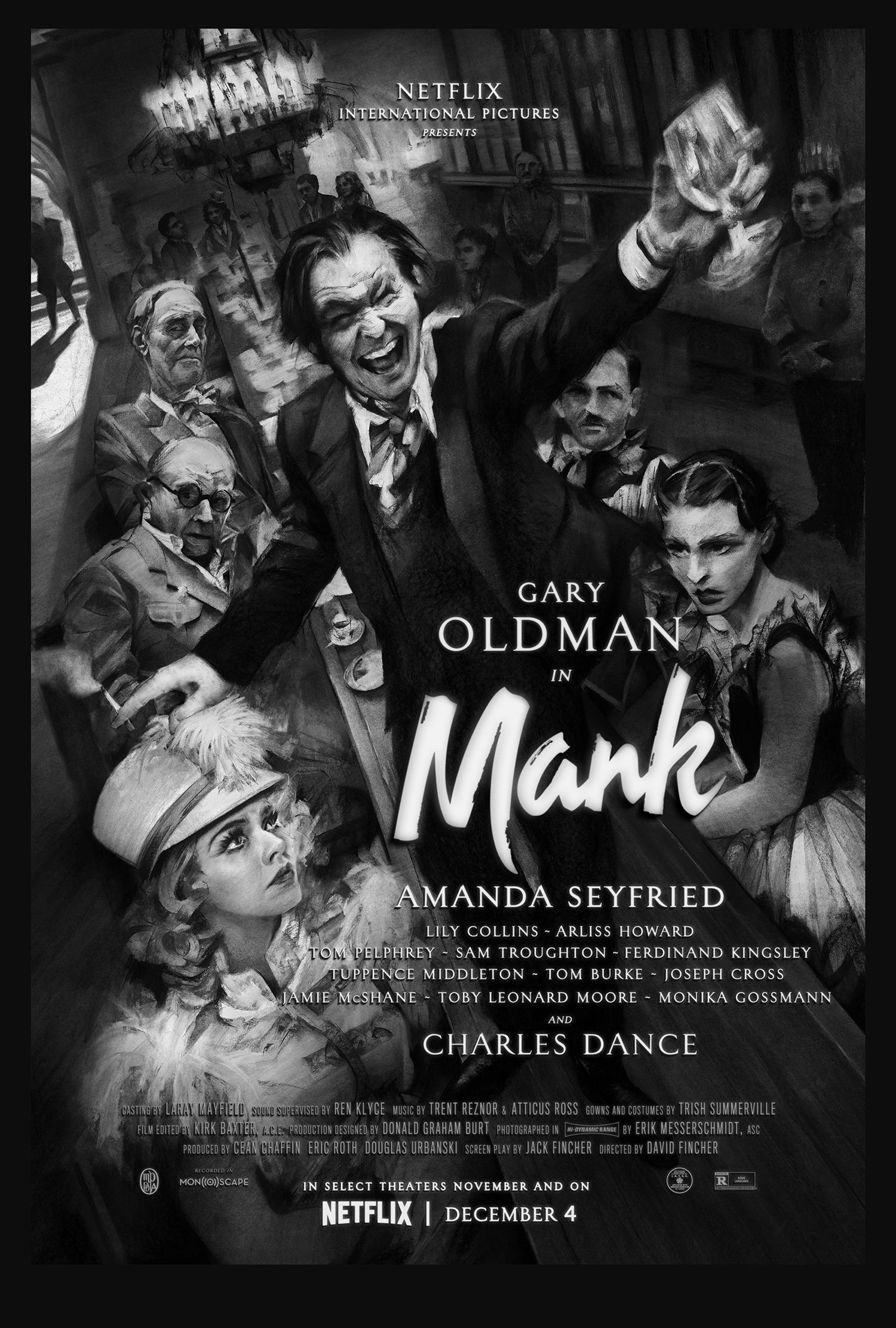 Hollywood is filled with fascinating stories outside the pictures it creates, some sparking controversy, others too good to be true. With over a hundred years of film industry tales and secrets, there’s plenty to gleam from in biographical features, one of which being the argument over who really wrote “Citizen Kane,” one of the defining films of cinema’s history.

I was interested to watch “Mank” ever since they dropped the trailer for it a couple months ago. David Fincher is always a safe-bet when picking a movie to watch, and he sparked intrigue with this deep dive into the 1930s of cinema. Clearly, he wanted to emulate what was done back in the old days, filming in black and white, adding a haze effect, warping the audio, and implementating transitions to create a sense of a film style long gone. These aspects alone drew me to the project, but little did I know the story behind it all.

Before seeing “Mank” on its premiere day at Netflix, I watched a little video essay on the history of “Citizen Kane” in regards to the writing process, to which many scholars have argued who really penned the Oscar-winning picture. Did Orson Welles really help write it? Or was it all Herman Mankiewicz, a crazed drunk who often was pictured as a jesture in film circles. There’s tons of research on the matter, particularly revolving around a book published in the 70s that claimed Welles had no part in writing the film, but took credit for what Mank did (“Raising Kane”). This publication sparked outrage with friends and colleagues close to Welles, and soon enough, another biography was issued by a man who interviewed many people close to the director (and Welles himself) on the matter. Sure enough, the claims against Welles having any part in writing “Kane” were proven false, however David Fincher and his dad Jack still believe otherwise… (if you’d like to read more into this matter, I’d recommend checking out this article)

The story of “Mank” firmly takes the stance of Herman writing “Citizen Kane” himself, painting Orson Welles as this lurking villain filled with greed. This isn’t the whole narrative, mind you, but the fact that the Finchers took a side in this matter made for a rather controversial experience. I enjoyed many facets of “Mank.” It’s shot beautifully, with brilliant performances and an attention to detail. It breathes the air of “Chinatown,” where its a world drenched in politics and corrupt, powerful men. There’s a ton to chew on in this, particularly because it acts as a history lesson more than anything (how much of this history is skewed is up to the audience). And while I certainly did not understand all of it, I found myself glued to the screen for the full two hour experience.

This is a film buff’s film. No question about it. Outside of the rich history in both the world and figures of Hollywood, circa. 1930s, there is not a whole lot for an audience member to take from the story. I can definitely see people getting lost, as much as I did. I found myself researching certain figures as the movie played, trying to become more aware as to what the stakes and who all of these people are. However, as a film guy, I loved it. Sure, I didn’t understand a lick of most things, but I felt engulfed in this world of the 30s. It transported me back in time, and the care put into making it look like a movie of old paid off. There’s a lot comprised in “Mank” that all plays into the screenwriter’s inspiration in crafting “Citizen Kane” (which was first just titled “American”). Some of it sells, some of it lingers. Either way, it made me want to do some more research into the time and get more of a sense as to what the politics were of the decade. There was truly a lot of corruption within the film studios (as I am sure there is still to this day).

“Mank” is not a movie for everyone. For the popcorn moviegoers, they might be bored. There’s a lot Fincher asks of his audience to bring to this adventure, which will ultimately be the “make it or break it” deal for anyone. While I wish I knew more of the subject matter to grasp the story better, I was still enthralled by all the technical aspects that went into the making of the film. My biggest gripe would really lie in the portrayal of Orson Welles, who wasn’t really given a fair shake in this story. With the stacked evidence supporting Welles’ involvement in the writing process, it seemed a bit brash to paint the pioneer as a greedy, dark figure who wouldn’t toss Mank a bone. It clearly shows Fincher’s opinion, and that’s ultimately what this feature ends up being: a biased historical piece. I enjoyed it for what it was worth (and it’s worth a lot), but wish that there was less partiality to the impact of Welles on the film. FINAL SCORE: 80%= Juicy Popcorn

One response to ““Mank””