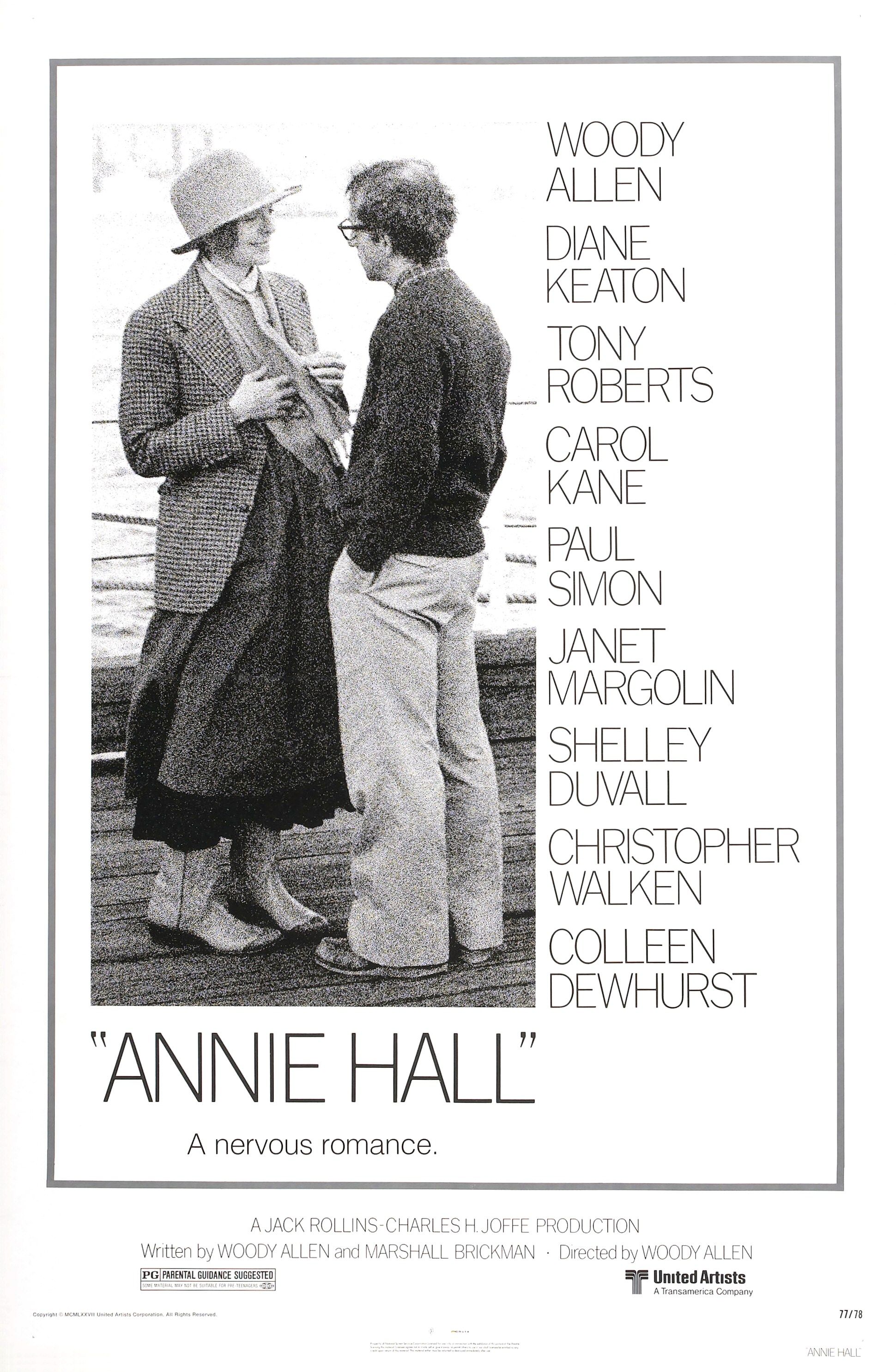 Alvy Singer (Allen), a Jewish comedian twice-divorced, reflects on his relationship with Annie Hall (Keaton) and how it came to an end.

It was bound to happen, folks. One way or another, I was going to end up reviewing another Woody Allen flick. Sure, I could’ve chosen anything else; perhaps a newer title, given how I haven’t really analzyed anything from 2021. Fooey, I say! You can keep your new-age cinema dribble. Give me the classics that I have yet to see. And boy howdy hey, is “Annie Hall” something.

What could very well be the trailblazer for modern romantic comedies, “Annie Hall” presents us a tale we all know through the lens of a neurotic, jumbled comedian. It’s Woody Allen on the cusp of Woody Allen, the feature that kicks him off on a trail of titles holding similar qualities that we would later deem his schtick: people walking and talking with no cut, characters being involved in the entertainment business, a New York-esque setting, and a deep cut into the social norms of the time. It’s humorous, witty, and – above all – a mess.

Did that word set you off? I hope so. Believe me when I say that the word “mess” comes from an endearing place. Working in a non-linear structure, “Annie Hall” takes us through Alvy Singer’s life surrounding Annie Hall. Their dates, the women he’s been with other than her, and the therapy of having to deal with such a unique individual. With almost no sound/music queues in ear shot, nor a consistent amount of narrative lead-in, the story marches to the beat of its own drum, with the audience having to follow closely. Halfway through the picture, I turned to my friend (who strongly recommended this to me) and said “this movie is all over the place.” He concurred. But then again, isn’t that the point?

Don’t get me wrong, I wish that this piece had a more fluid train of thought. It would’ve served me better in the long run. But what it does right is it keeps me on my toes. I’m constantly leaning in, trying to piece together a relationship that from the get-go is already broken up. And it’s not like Annie Hall is the entire focus of the story; Allen takes jabs at many things regarding relationships and society at large. The film serves as a soap box of sorts, leading into the classic use of fourth wall breaking. It’s fun, and will certainly be a treat to those who enjoy analytical rom-coms.

The performances in this film are quite wonderful, with everyone earning a fair share of laughs. Allen does his thing, and Keaton shines as a woman who has to put up with him (and learn more about herself). The secondary roles are very interesting, with quite a few notable actors/entertainers lighting up the screen from Paul Simon to Christopher Walken (my favorite) to John Glover to even a brief cameo by an unknown Jeff Goldblum (who was hired as an extra!). It’s an enjoyable character piece with a lot to chew on. Honestly, it would warrant a rewatch since the first viewing is more so about getting acquainted with the story.

Before watching this, I was told that it’s like “(500) Days of Summer,” but for adults. For the most part, this is true. It’s non-linear, witty, whimsical in its style, and focuses on a guy and a girl without really being a “love story.” However, at the end of the day, “(500) Days of Summer” wins out. Call me names, spit on my face, I know I’ve offended some people. It’s safe to say that “Annie Hall” is a great rom-com that set a standard for others in the genre to follow. It laid groundwork that is irrefutable, and is full of comedic moments that will at least garner a nose whistle. Aside from the choppy structure and the fact that I don’t know how Woody Allen is an irresistable male to these women characters (boy is his personality a piece of work), it’s an entertaining watch. If you haven’t seen it, I’d say give it a go. FINAL SCORE: 91%= Juicy Popcorn

One response to ““Annie Hall””